Review: The Lost Hero (The Heroes of Olympus, Book 1) by Rick Riordan 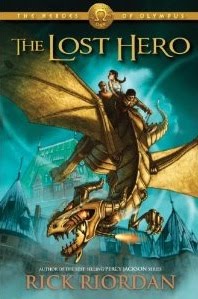 I read the Percy and the Olympians series by Rick Riordan last year and fell in love with Percy and his crew. The Lost Hero is the first book in The Heroes of Olympus series and a continuation of the those adventures. However, in addition to the already established characters and Greek mythology-based world, Riordan introduces new heroes and villains, quests, a new prophecy, a looming battle and adds Roman mythology to the mix.

Mr. Riordan begins this new adventure by introducing his central characters, Jason, Piper and Leo as they're on a field trip away from the Wilderness School for incorrigible teenagers and on their way to the Grand Canyon. Immediately we know there's something wrong when Jason wakes up in the back of the school bus and doesn't remember who he is or where he came from. He doesn't even recognize his girlfriend Piper or Leo, his best friend.

As our three friends work on essays or admire the views, strange weather turns violent and soon Jason, Piper and Leo find themselves under attack from dark forces or venti. Their teacher Coach Hedge comes to their defence saving their lives. After a quick and messy battle where Coach Hedge is lost, the three are rescued by Annabeth and taken to Camp Half-Blood for safety where they learn who and what they are.

While at camp, Piper and Leo are claimed by their respective god (parents) and mysteriously, Jason finds he has already been claimed and by whom. After a series of on-camp adventures, visions and prophecies, the three are sent on a quest to save the (not-so-likable) goddess Herra who has been imprisoned by an unknown evil. A month earlier Zeus closed off Olympus and no one has heard from the gods, so the three friends must succeed without help from the gods or even Annabeth who is off to find a lost Percy! The adventure begins and our heroes will meet cyclops, wind gods, giants, werewolves and more as they prove their loyalty and bravery to themselves and each other along the way.

Since the Lost Heroes is a continuation to a series, there's no worldbuilding to set up and secondary characters have already been developed, so the readers can get right into the story. However, Riordan does add newness to the worldbuilding by incorporating Roman mythology and weaving it with the Greek mythology introduced in the Percy series, giving this book a fresh feel.

Although Riordan stuck with three heroes and the same formula: two boys and a girl, the characters themselves also felt different and unique.


The story is divided by chapter with the titles Jason, Piper and Leo, but written from the third person point of view making this an easy read. Internal dialogues abound with most of the revelations happening in dream sequences and then related to others, slowing down the pace and isolating the characters in some sections. At times, the dialogue is somewhat stilted and lacks flow. And although the humor is provided mainly by Leo's character, there's not enough of a give and take from Jason and Piper to really make it pop.  Real action is slow to come, although once on their way our heroes encounter plenty of obstacles throughout their adventures.

I enjoyed The Lost Hero, it had plenty of strengths and some weaknesses. It was a quick and easy read with great action and new adventures. I loved the new twists and turns that Riordan added to the Olympus series by incorporating Roman mythology and look forward to the rest of the series. Plus there's definitely a bit of a cliffhanger there at the end, and I must know!

The protagonists in this book are teens, but these books are appropriate for (and I believe will be fully enjoyed by) middle schoolers. I do recommend that the Percy and the Olympians series be read first for a better understanding of the world and characters.