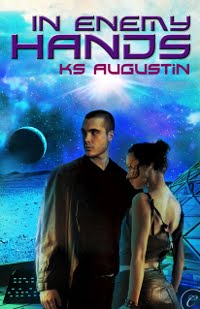 The Republic had taken everything from Moon—her research partner, her privacy, her illusions. They thought they had her under control. They were wrong.

Sirin, Moon's new research partner, is a chemically enhanced math genius whose memory is erased every two days. He's also a charming, fascinating man who is attracted to her anew after each memory loss cycle.

Escape from the regime that treats them like tools is impossible. There are too many walls around them, too many eyes watching. But when you've got nothing left to lose, running becomes the only option.

I'm always looking for new sci-fi romance and new-to-me authors, and when I saw In Enemy Hands by KS Augustin, it looked like the type of story I would enjoy and I was right.

Moon's life changed when unbeknown to her, her trusted research partner turns out to be a rebel against the Republic -- a Republic she's always been loyal to. She's taken in for interrogation, endures years of imprisonment and torture for crimes committed by her partner and to Moon, it seems as if her research, career and dreams have come to an end.

After all that suffering, Moon's life takes another turn when the Republic gives her a chance by allowing her to continue her research in a new lab they've built specially for her on a moving vessel. Her research is important enough that they've even given her a unique working partner. Srin is not a scientist, but can accurately solve the most complex mathematical calculations in his head and is considered a biological, human computer. The catch here is that Srin's memory is erased every two days. Eventually Moon and Srin realize that they are being used by the Republic and are left with no recourse but to attempt an escape.

Moon and Srin are attracted to each other and during those first two days after they first meet, they bond. But because Srin's memories are erased, every two days it's as if they've met for the very first time. Srin is attracted to Moon every single time and for Moon it becomes a joy and a heartbreak. There was such chemistry and sweetness between this couple, that I couldn't help but love them both. Because of the circumstances and Srin's lack of memory, Moon takes the lead when it comes to their predicament and she makes a wonderful female protagonist, but in the sensual department they are definite partners.

KS Augustin doesn't skimp on sci-fi details either. She establishes her world, how the Republic works firmly at the beginning and continues to develop it throughout the story. The research for the technical parts of the book is extensive and will satisfy science fiction fans, although I suspect that it might be a bit much for others. It worked quite well for me personally, although there were some sections where I wish the technical and the romance had been better integrated with each other.

In summary, I enjoyed In Enemy Hands for the most part. The characters were well drawn, the worldbuilding was firmly established and the science fiction technical details were excellent. Frankly, I fell in love with Srin as the male protagonist in this story -- he was just too sweet for words -- and by the end I admired Moon's strength and determination. On the other hand, this book is obviously part of a series and unfortunately the ending was a bit too ambiguous for my taste. I was left frustrated, looking for the next page, wondering what I had missed and searching for the end to this wonderful story. I can tell you this, I enjoyed In Enemy Hands enough that I'll be reading the next installment.

Visit KS Augustin here.
Posted by Hilcia at 11:30 AM