...On Chulito by Charles Rice-González 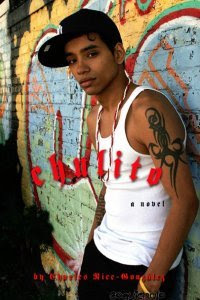 I was able to finish reading one book last week while surrounded by stressful family situations, mainly because that book just wouldn't let me go even through all my worries and stress. That says something about a book, yes? Of course, this is by no means a perfect book, plot-wise there are a couple of questions that are not answered by the end, but this is a minimal complaint from me compared to what it offered.

That book is Chulito by Charles Rice-González. This author co-edited and included a story in the From Macho to Mariposa: New Gay Latino Fiction anthology that I reviewed recently. However, Chulito is not a pure fiction read, although the excellent writing and the in-depth exploration of characters and their motivations certainly places it in that category. Chulito takes center stage in this story as he comes to terms with his sexuality and his developing romance with childhood friend Carlos. So there's a coming-out story with a romance between two young adults -- sixteen and seventeen years of age -- with sexual content and mild violence included. How the author goes about telling his story? Well, that's what this is all about.

There are quite a few aspects of the book that grabbed me from the beginning. Rice-González develops the romance and especially Chulito's slow journey toward coming to terms with his sexuality by using the South Bronx as the backdrop for his story, so his characters are for the most part Puerto Rican kids from a Latino neighborhood. First, he really captures the neighborhood's atmosphere -- both the sense of belonging and the claustrophobia felt by the residents of Hunt's Point. Second, his focus and grasp of Latino macho culture is excellent. The author depicts how the extreme macho Latino's attitude manifests itself toward women. However where the author really succeeds is in his main focus which is in showing how the gay sub-culture is viewed and the effects that macho attitude has on gay Latinos.

Rice-González explores this macho culture from the inside out by making Chulito a Latino "thug in the making," one who has to make a decision between being what it's expected of him in front of his "boys," or being true to himself and his very confusing feelings for his childhood friend Carlos. As you can well imagine, this is not an easy decision for Chulito to make, not when he has been brought up to believe that being a "pato" means rejection and possible violence from the very people that mean so much to him.

Carlos represents the smart, educated Latino young man who left the neighborhood to go to college. He's also gay, out, proud and ready to leave the neighborhood, except that he himself is pulled back not only because his mother and Chulito live there, but also because of that sense of belonging. Carlos is an admirable character in this story, not only because he is 'out' in the neighborhood and doesn't care what anyone thinks of him, but because he refuses to compromise his beliefs. Interestingly enough, to a certain degree even Carlos can't help but be attracted to and admire the beauty of Latino men. The macho attitude is a big turn-on for him, Chulito's in particular.

There's a section in the book where Chulito is dreaming and Rice-González conducts an in-depth exploration of the different degrees on the "macho" scale. This is also where the author begins to bring some balance to the equation.


Then they had a quote from the woman who invented the Macho Meter: "All men have macho in them. Even gay ones, but there are varying degrees, and while most forms of macho are lethal to the progression of the world and society, there are some acceptable levels, very low levels, that can sometimes be useful."

There are female characters included in the story and Rice-González mixes it up by portraying sad, dysfunctional and healthy relationships between men and women to round up this story. There are also examples of different types of males used across the board. From the drug dealer Kamikaze and the would-be macho thugs hanging on the corner, to ex-convicts and the hard working men who populate the neighborhood.

Also key to this story are the gay characters that live in the neighborhood: Julio or La Julia owns the local travel agency and serves as an example and mentor to the younger men. Puti is the sad and lonely local drag queen. Lee from the Chinese restaurant, and one of the best characters in this story, Brick. Brick is a tough ex-drug dealer who got out of the game and whose best friend is Julio. He's flawed with positive and negative sides to his character, but serves as a great example of the Latino uber macho whose masculinity is not threatened by his close friendship with a gay man. Overall there's a wonderful mixture of characters.

Rice-González takes his time developing this story. Chulito's background, feelings, the challenges he faces on a daily basis are all explored in-depth. His life in the neighborhood as a runner for Kamikaze, the local drug dealer and Chulito's mentor. The relationship he has with his "boys" from the neighborhood. The deep love he shares with his mother Carmen and the resentment and indifference he feels for his dead father. Coming to terms with his sexuality is not an easy step or a ride in the park, and his romance with Carlos is riddled with deep disappointments, betrayal, tenderness, passion, yearning (like you wouldn't believe), angst, and deep love.

Ever since I read From Macho to Mariposa I've been looking for other books to read by gay Latino writers and well... I thought this book might be the perfect beginning. It was. Chulito is a great mixture of gay fiction and romance with a focus on the gay Latino experience. I highly enjoyed Charles Rice-González's writing style and his down to earth, no holds barred depiction of characters, culture, sub-culture, circumstances and setting in Chulito. I will keep my eye on this writer, hopefully there will be more books like this one from him in the future.

ETA: This was not meant to be a review, just my thoughts or impressions on the book (see post title). But, I think it turned into a review in the end, so I gave it a grade... Solid with excellent qualities!
Posted by Hilcia at 2:18 PM