Veteran's Day: Thanking All Who Serve

Veteran's Day is a day honoring all veterans in the United States. This day coincides with other holidays around the world commemorating Armistice Day -- the anniversary of the signing of the Armistice that ended World War I, which took place on the 11th hour of the 11th day of the 11th month.

Red poppies became a symbol representing veterans because of the poem In Flanders Fields written by Canadian military physician Colonel John McCrae.  Worn by veterans around the world, in the United States the poppy became the official memorial flower representing veterans in 1922. Have you seen red poppies worn and sold on Veteran's Day? They are sold to honor those who serve, but also to collect monies to assist veterans returning from war and their families. So don't forget to wear your red poppy today to honor those who have served. 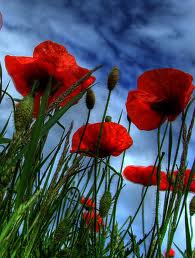 In Flanders fields the poppies blow
Between the crosses, row on row,
That mark our place; and in the sky
The larks, still bravely singing, fly
Scarce heard amid the guns below.
We are the Dead. Short days ago
We lived, felt dawn, saw sunset glow,
Loved and were loved, and now we lie,
In Flanders fields.
Take up our quarrel with the foe:
To you from failing hands we throw
The torch; be yours to hold it high.
If ye break faith with us who die
We shall not sleep, though poppies grow
In Flanders fields.
❧❧❧❧❧❧
Today is a day of remembrance and thankfulness in my family. My husband's father and his beloved uncle were both WWII veterans, and his son and our daughter-in-law are also veterans. Today, we thank our loved ones, as well as all those who have served and still serve.