Review: In His Secret Life by Mel Bossa 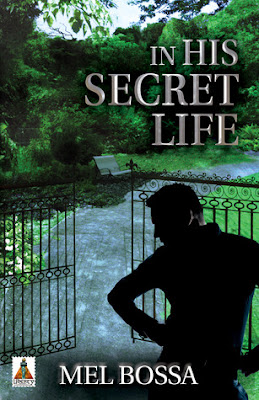 I fell in love with Mel Bossa's story telling and writing talents when I read her debut full-length romance Split, and then that was reinforced when I read her second novel, the magnificent Franky Gets Real. This year? This year, it is In His Secret Life, the romance between Allan, a gay man who falls in love with Davinder, a bisexual man struggling with his life's choices.

Allan and his sister Elsie are alone in the world and very close to each other. He is very protective of both Elsie and his young niece Faye. It's not surprising then that he's happy but a bit taken aback when she falls in love with Dayton and plans to marry soon follow.

Allan's life really becomes complicated when he meets Dayton's bisexual older brother Davinder. There is an immediate, strong, mutual attraction when they meet and the two begin a secret, passionate affair, but the real conflict comes from the fact that Davinder is married with two children, and he's also about to become Elsie's brother-in-law. Allan continues the affair believing that Davinder is on the verge of ending his marriage, while all along Davinder is conflicted between his feelings for Allan and the responsibility he feels toward his marriage and children. As is the case with secret affairs, there are lies, betrayals, and broken hearts.

When Elsie becomes aware that the affair is going on, she tells Allan that Davinder is really working on his marriage and that he should do the right thing by leaving. Allan ends the affair, sells his condo and moves away, refusing all further contact with Davinder. Years later, a family member in need of clarification brings it all back.

In her romances, or romantic fiction, Bossa focuses on relationships from the perspective of both gay and bisexual males. Her couples find a happy ever after, which places her books firmly into the "romance" category. However, Bossa also presents issues and conflicts confronted by the couple as they enter into a relationship as well as how those issues affect each individual, from both gay and bisexual perspectives. Her characters are three dimensional, human and flawed, which I personally love. This includes her secondary characters and interpersonal relationships that occur between the main characters and those very important secondary characters.

In His Secret Life is a fantastic romance with forbidden love, sexual tension, intense yearning, and angst. It's one of those all-encompassing, sweeping, lasting romantic love stories between two men who are also selfish enough to cheat and lie to be together. They pay a high price, but in the end find their way back to love. The execution in this romance is fantastic, as Bossa follows through with all the characters, the choices, consequences, life and love. My favorite LGBT romance of the year to date... I highly recommend it.