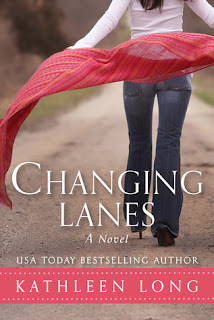 Abby Halladay has the perfect life. Or, rather, she will…as long as everything goes exactly according to plan. Abby never leaves anything to chance—not her job as a syndicated columnist, not her engagement to her fiancé, Fred, and certainly not her impending wedding in Paris (New Jersey, that is).

Unfortunately for Abby, even the best-laid plans often go awry—like when Fred runs away to Paris (France, that is), her column is canned, and her dream home is diagnosed with termites. Forced to move back in with her parents and drive her dad’s cab, Abby’s perfect life has now officially become the perfect disaster.

Then a funny thing happens. Slowly but surely, Abby begins letting go of her dreams of perfection. As she does, the messy, imperfect life she thought she never wanted starts to feel exactly like the one she needs.

In the book summary for Changing Lanes by Kathleen Long the female protagonist is presented as a woman whose 'perfect life' unravels all at once so that she must shift gears to accommodate all the changes that come along with the unraveling. The words perfect, imperfect, and planned life are prominently used in the summary. I wanted to know what this woman believed a perfect life would entail. Additionally, a few questions immediately popped up: what drives a person, in this case Abby, to plan the details of her life to the point that she doesn't know the people around her (her fiancé) let alone herself, so than when life's little surprises come along they indeed become disasters?

Abby Halladay is the type of woman who plans her life in minute detail and believes that being thought of as "predictable" is a compliment. Her life goes into a tailspin when she loses her job as a syndicated advice columnist and finds out that the beautiful Victorian home she's supposed to move into is riddled with termites. But as she arrives at her parents home in Paris, New Jersey where she'll be staying temporarily, Abby's life goes from disaster to catastrophe when her fiancé Fred calls to say that he is in Paris... France! The reason he gives for leaving two months before their planned wedding? He is. . . "bored!" This humiliating moment is magnified as it is witnessed by high school friend and next door neighbor, Mick O'Malley. Abby hasn't seen Mick since he left town years ago in disgrace right after a graduation party. Now Mick is back in town to care for his mother Detta.

Abby's family offers temporary solutions to her problems. A place to stay, a job driving her retired father's taxi cab, and 24 hours after getting dumped by Fred her mother begins inviting men to dinner so Abby can "move on with her life!" Abby is in denial, she doesn't want to drive a cab, nor does she want to move on. . . she wants to talk to Fred to find out if he will be back before the wedding! What? Why is she not angry with Fred? But Abby's family doesn't talk things out as a rule. It's a loving family that always kept masks firmly in place. Abby recognizes this, but she herself is very much a part of the family.

I couldn't understand certain aspects of Abby's rather frustrating personality. She plans everything and for her it is all about doing what is right, being nice and polite, and making sure everything falls into place in her life. Image is key to Abby. Even as the 30 year-old woman who returns to Paris, she won't take responsibility for a mistake if it damages her image. Kathleen Long takes her time with Abby's character growth so that even as this character takes steps forward, moments of doubts and lack of confidence return. Questions: Why does Abby refuse to see Fred's actions for what they are? Why is she still contemplating marriage when Fred returns from France?

It takes a village to help Abby change lanes. First, an encounter with Mick's mother Detta changes her perspective after they share a magical moment. Later, her family -- mother, father, sister, and grandmother -- all contribute to Abby's decisions about her future. As Abby begins to see her family members anew, she also begins to appreciate life's moments and discovers what she wants out of life. This is the bulk of the story with Abby driving the cab, helping her family and others around town see their own happy moments, and using Mick as a sounding board when needed. Question: Why does Abby go around town fixing other people's lives so easily and naturally when she can't figure out how to fix her own?

You wonder if there is a romance in this story? Well, yes and no. Mick and Abby reveal pieces of their lives to each other, but they leave much unsaid in between the lines. Their conversations are always left unfinished or end abruptly with either one or the other not saying what they really have to say. So, although there is a romance and a happy ending, it is not a satisfying one where the characters' feelings for each other are explored in-depth. On the other hand, although as a character Fred has little page time, his presence is felt from beginning to end and drives much of what happens in Abby's life. This off-page secondary character is well done. Question: Why doesn't Abby show her anger when she confronts Fred?

Despite the fact that Kathleen Long introduces some pretty heavy subjects as the core to Changing Lanes, she approaches this women's fiction story with humor and a light touch. It is a quick read and not heavy at all. As a matter of fact, in my opinion, the heavy subjects are treated with too light a touch and not enough substance. Were my questions answered? Some were, others were left unanswered.