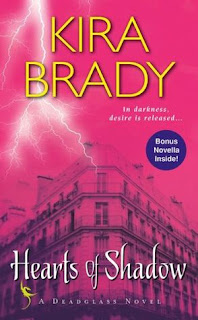 Kira Brady created a memorable world-building for her Deadglass trilogy in the first book, Hearts of Darkness. I particularly enjoyed the fusion of paranormal romance and urban fantasy that I found there. In Hearts of Shadow, Brady maintains a fine balance between the gritty atmosphere and paranormal elements while focusing on the romance.

Grace Mercer walks on the dark side. She is an angry, traumatized woman who lost much in her life and is driven by that anger and loss. At age sixteen, Grace became Sven Norgard's blood slave and fell in love with the mad Dreki regent. It is clear that although Sven was a manipulative, lying monster, Grace, blinded by infatuation and thoughts of revenge initially became his willing blood slave and bed partner. Later when he abused that bond, she came to resent and hate both him and the bond, cementing Grace's hatred of the Dreki.

Grace needs to continue her work on the streets, keeping humans safe by wraiths by fighting and vanishing wraiths. Leif Asgard may say he's different and not at all like his brother Sven, but along with the regent's crown he also inherited the ring that keeps Grace a blood slave, now tied to him. She's not about to trust another Dreki. That lack of trust becomes a problem when she gets to know Leif and the attraction grows.

Indeed, Leif is not happy about inheriting the position, the blood slaves, or the war that looms in the horizon between humans, the Kivati and the Dreki caused by the Unraveling triggered by his power-mad brother. Now, wraiths, ghosts, and a power-hungry demi-god from the other side of the Gates roam the streets of Seattle possessing humans and causing further havoc. Leif is a scientist and prefers working in his lab developing new gasworks that will eventually light up Seattle. But between the attraction for Grace that drives him to keep her safe and the responsibilities that keep piling up, Leif has no choice but to take the much detested crown.

I didn't have a problem picking up the story where it left off after the first installment, or remembering the already established world. Additionally, Bradley's characters made enough of an impact during the first book that I remembered details about both Grace and Leif, making Hearts of Shadow a quick, easy read. I liked both Grace and Leif. Grace is a kickass human heroine with the training and ability to fight humans possessed by supernatural beings. This "acquired power" is well explained by Brady, it doesn't just happen. Grace is secretive but when revealed she is a determined and willful woman with a soft spot for the downtrodden and a weakness for the gorgeous Leif. She fights the attraction relentlessly and is blind to the differences between Leif and his brother Sven. As a matter of fact, Grace dwells on Sven a bit too long if you ask me! But eventually the romance between Grace and Leif works rather well...

Leif develops an insta-sexual attraction for Grace that begins through the blood slave bond, turns into curiosity about the woman and moves from there. He's younger than his brother and has not yet been affected by the darkness that the beautiful but soulless dragon-shifters are known for, so he's gentler and hopeful. But, Leif is contradictory in his actions (he ruminates about this throughout the story) -- one moment acting the gentleman, and the other playing the overbearing male. Grace pushes him to the edge, though. This back and forth play between the couple makes for good tension, and eventually some hot coupling scenes.

Of course the book is not just about Leif and Grace's conflicted romance. There is a whole complex story arc that began in the first book and ended there with the Unraveling but continues in this installment with the rise of a new evil demi-god. The Kivati and humans are involved in the fight as are the Dreki. Secondary characters abound, but the most notable are the Kivati, of which the Raven Lord Corbette and his intended Lucia make the most impact because of decisions they make that will affect the last book of the trilogy. Although I must admit that I really like Lord Kai.

There are many ins and outs in this story that I enjoyed, and others that were just a bit confusing. The climactic scene in particular is somewhat confusing or muddled. I'm not exactly sure what happened to Grace. I re-read that scene a few times and never came away with a clear answer. Additionally, I had questions about abusive behavior toward women when I reviewed Hearts of Darkness, and Grace's character was my main concern. Although it is made very clear that a blood slave can only become one by his/her own will, the past sexual relationship between Grace and Sven combined with the fact that it was manipulative in nature implies non-consent. In the present relationship, however, Brady clearly goes to great lengths to ensure that Grace maintains the upper hand when making decisions in regards to sexual matters.

Hearts of Shadow is a quick read full of action, paranormal details, and that gritty urban fantasy atmosphere I like so much. The romance is conflicted with a push and pull that creates both friction and sexual tension. Brady follows through quite well with the overall story arc, although I truly found the climactic scene confusing. Corbette and Lucia are not favorite characters so far, but the Kivati as a whole are fascinating to me. I'm hoping that the characters will grow on me as they are revealed in the last book of this trilogy.

BONUS NOVELLA: Hearts of Fire
There is a bonus novella included with the mass market paperback copy, Hearts of Fire. In this prequel novella, Kira Brady goes back to the time when Norgard first settled in Seattle with a colony of dragon-shifters and Corbette's father was still the Kivati Chief. This is a short but very informative and emotional novella covering the romance between Corbette's sister, Alice, and newly arrived Dreki, Lord Brand. This little romance is quick with a passionate love at first sight developing on both sides, but Alice is an strong female character and Brand a lovely, lovely male, particularly for a dragon-shifter. Additionally, this novella sets the stage quite well for the series and for the next book. Grade C+
----------
Series:
Hearts of Darkness, #1
Hearts of Shadow, #2
Hearts of Fire, #0.5
Posted by Hilcia at 4:42 PM