Poetry: Looking for The Gulf Motel by Richard Blanco 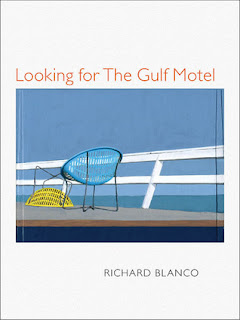 I finally read Richard Blanco's collection of poems, Looking for The Gulf Motel. Simply said, I connected with Blanco's poetry, his search for cultural identity and love of family. These are the notes I wrote right after reading the book: Blanco uses a narrative style in this emotional biographical piece that touched and in some ways soothed me. I recognized and connected with many of his personal conflicts as the child of a loving, if tough and judgmental, immigrant Cuban family. I laughed in some places, but strongly felt his emotional anguish and nostalgia in others. This is a book I will definitely re-read.

However, although in the first section of the book Blanco explores his childhood, family relationships, and Cuban cultural ties, the second section is dedicated to struggles with family, sexual identity, and the gay lifestyle, while the last section turns introspective and is dedicated to loss, particularly the loss of those family members who are irreplaceable not only because they are deeply loved, but also because they maintain necessary cultural ties alive and kicking.

As the introductory poem to the first section of the book where Blanco features poems about his childhood, "Looking for The Gulf Motel" is particularly memorable. In this poem, Blanco searches for a place where with his parents and brother, he once spent a happy, almost idyllic vacation by the sea. He finds that although happy memories remain, everything changes with time and loss. "[. . .] I want to find The Gulf Motel exactly as it was / and pretend for a moment, nothing lost is lost."

In that first section where Blanco explores and searches for cultural identity, his poem "The Name I Wanted:" is a classic example of cultural ambivalence, and "Betting on America" brought back personal childhood memories, the last line of the poem in particular "¿Donde está Ohio?" is just classic! However, it is in "Cousin Consuelo, On Piano" that Blanco truly captures the sense of displacement felt by a first generation of children born to immigrants.

[. . .]¡Guantanamera! . . .
I had to listen to my grandmother
caterwaul, dabbing the corners of her eyes,
her voice cracking over a country I didn't
know yet that had to love like Tía Miri did,
singing about el campo I never saw yet had
to feel Consuelo's notes rising into
mountains, resting in valleys, the click of her
nail-tips on the keys like rain falling in the
room, on my father. [. . .] I had to sing with
him like a real Cuban, had to feel displaced,
broken, beautiful -- and clap for more, had to
make Consuelo play Guantanamera twice,
three times, [. . .]

In the second section with such poems as "Playing House with Pepín," "Afternoons with Endora," and "Queer Theory: According to My Grandmother," displacement is intensified by a sense of not belonging as Blanco explores struggles with sexual identity and family views. In "Love as if Love," Blanco goes further with his poem about Elizabeth. ". . . / loving as if I could lover her." But of all these, I love "Thicker Than Country" best, a poem depicting Blanco's life with and love for partner Mark after they move to Maine. The last section of the book dealing with painful loss and remembrance is specially touching and contains some of my favorite poems, ending with the gorgeous"Since Unfinished." Following is an excerpt from one of those poems:


Some Days the Sea

[. . .]
I'm still a boy on this beach, wanting
to catch a seagull, cup a tiny silver fish,
build a perfect sand castle. Some days I am
a teenager blind to death even as I watch
waves seep into nothingness. Most days
I'm a man tired of being a man, sleeping
in the care of dusk's slanted light, or a man
scared of being a man, seeing some god
in the moonlight streaming over the sea.
Some days I imagine myself walking
this shore with feet as worn as driftwood,
old and afraid of my body. Someday,
I suppose I'll return someplace like waves
trickling through the sand, back to sea
without any memory of being, but if
I could choose eternity, it would be here:
aging with the moon, enduring in the space
between every grain of sand, in the cusp
of every wave and every seashell's hollow.

About the Author: Richard Blanco was selected as the 2013 inaugural poet for President Barack Obama. He is the author of two other poetry collections: Directions to The Beach of the Dead, winner of the PEN/Beyond Margins Award; and City of a Hundred Fires, winner of the Agnes Lynch Starrett Poetry Prize. Exploring themes of Latino identity and place, Blanco's poems have appeared in Best American Poetry 2000 and Best American Prose Poems and have been featured on NPR. He is a fellow of the Bread Loaf Writers Conference, recipient of two Florida Artist Fellowships, and has taught at Georgetown and American universities. A builder of cities and poems, Blanco is also a professional civil engineer.