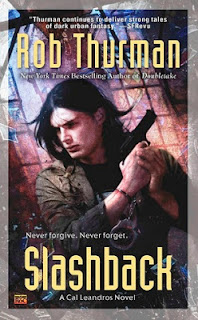 I stopped and let them circle me, first because it was intriguing and, second, because, honestly, what could they do? Only knives, but all armed, and that made them even more interesting. Interesting. Fun.

Taking on bloodthirsty supernatural monsters is how Caliban and Niko Leandros make a living. But years ago—before they became a force to be reckoned with—the brothers were almost victims of a very human serial killer.


A few years ago, Leslie of Leslie's Psyche introduced Nath of Books, Books and More Books and me to the Cal Leandros urban fantasy series by Rob Thurman. The three of us enjoyed it so much that we began Buddy Reviewing it together. The series is now on the 8th installment and we are still reading and reviewing it together!  You can read our Buddy Review of Slashback at Breezing Through.