Review: Dust Devil on a Quiet Street by Richard Bowes 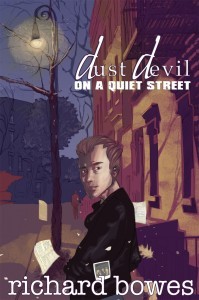 I was introduced to Richard Bowes's writing by way of a short story. Later I read and really enjoyed his adult fairy tale book The Queen, The Cambion, and Seven Others. His short story "Grierson at the Pain Clinic" in the Wilde Stories 2013 anthology was so unique and creative that I went hunting for his Lambda Literary Award-winning novel Minions of the Moon. So what is it that about Richard Bowes' works that grabbed me? I love the realism he utilizes to set up his fantasy. His latest fantasy novel Dust Devil on a Quiet Street has that quality in spades.


As a child I went to bed worried that the me who fell asleep would disappear in the dark and not be remembered by the me who woke up. I've never wholly lost that. It's one reason I write these stories.

Bowes's tale of dust devils, local ghosts and small gods begins in Greenwich Village on the evening of 9/11 right after the Towers fell. Richard's friend and old lover Megs insists that as a result of the tragedy, a rift opened and ghosts from past and present disasters are coming through and flooding the City. She can see them, and decides to search for the ghost of Richard and Megs' old lover Geoff. As this tale of ghosts, friendships, and lovers lost progresses, the reality of what happened on that beautiful, tragic September morning slowly creeps in as Bowes imbues the atmosphere and his characters with a sense of dislocation and disorientation so spot on that ghosts, dust devils and witch girls seamlessly become part of that reality.

As the story of Richard, Megs and Geoff continues, Bowes plays with time by relating events taking place in the present and connecting them to the past, taking the reader for a fantastic ride through a Village's past history full of the real and the supernatural. In the second chapter we learn what drives our main character and narrator, Richard. Supernatural events surrounding Richard's encounter with the eerie Witch Girls are weaved in with his college years, new friendships, sexual escapades, and a significant early childhood trauma that leads to a long battle with self-destructive behavior and drug addiction.


When I opened my eyes they were gone. I understood that what I'd done and what had been done to me were the misfortunes that come to a Witch Boy trying in all the wrong ways to be human.

The supernatural encounters continue as the reader is introduced to lovers, friends, writers, sexual escapades, and in the process is whisked back in time to a City that lived a long time ago. That is most evident in the Ray Light and Judy Finch incident where the narrator's strong presence is felt on the periphery while Bowes transports the reader to the 1960's in a mesmerizing story of young runaways, hippy life, hustlers, drugs, sex, psychic powers, and murder. Bowes brilliantly weaves the Ray Light incident throughout the whole book so that it blends in with the "memoir" style of this novel. But as I said before, he also plays with time, so that this and other events that begin long ago are effectively connected to events, or small moments, taking place in the present. It all works out quite well.

I particularly love how Bowes incorporates events that begin with the present as the setting but flow in and out of the past. In relating the death of New York City, Bowes turns to Richard's present and the ghost of a past lover Hal Dizeg, dubbed the Downtown Ganymede, who was legendary in the Village for his brilliant beauty and wealthy sugar daddies. Later they were involved as lovers in a relationship fueled by drugs that ended with Hal telling Richard: "I don't think you're really here, and you don't think I'm really human." But this chapter is about Richard's present and his nostalgia for the past. He is singularly harsh on a modern Manhattan full of yuppified New Yorkers, yet, not unexpectedly, Richard is always toughest on himself. The proof is in the pudding when returning as a ghost Hal leaves our aging narrator with these words: "It wasn't a soul you lacked, it was courage and timing, darling. You didn't know when it was your moment to die."

Dust Devil on a Quiet Street was more of an experience than I expected. It is a fantasy book full of those fantastic supernatural events some of us love, and yet, it is also much more. Bowes inserts himself as the central character, establishing a thorough connection with the reader while relating the highs and lows of life, such as they are or were, so that this book is an intricate, masterful blend of fantasy and life-long experiences gained during a lifetime of living in a New York City he knows and loves. Bowes is so good at using this device that there are times when the reader must wonder where reality ends and fiction begins. Highly recommended.


"Writing is the place where I can be as bold and compassionate and wise as I choose."