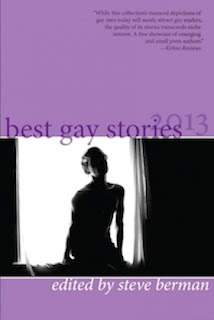 Berman chose a wide variety of stories written by well-known authors as well as new talent. The authors' writing styles are as diverse as their approach to the stories, and by the time I finished reading this collection it became obvious to me why each story and writer was chosen. The themes vary from young to adult love, and from fear of aging to committed partnership and cheating issues, but there is much more.

As in all collections of this size, there are pieces that stand out and there is always the question of preference, however, I firmly believe that within the twenty stories included in Best Gay Stories 2013 there are plenty of meaningful, excellent pieces to satisfy the most discerning reader. This is certainly a winning collection of gay themed stories for me.

This collection has 20 stories and B+ is a high grade, indeed, for such a large collection. As always when grading a collection, I take into consideration writing, content, and the editor's contribution. As an added bonus and because these stories deserve to be highlighted, below I'm including my brief impressions of the whole collection:

"Wheat, Barley, Lettuce, Fennel, Salt for Sorrow, Blood for Joy" by Alex Jeffers
Young Adult. This excellent and well-written mythology-based romance between two young men transports the reader to another time and place where youthful lusty thoughts and yearning abound.

"Two Variations on the Theme of Envy" by Matthew R. Loney
Looks don't make the man. "Dancing, I saw a man nearby whose face my gut said ugly to instinctively. [...] Thinking back, I may have even said unlovable." Two highly relevant shorts: one focuses on those often wrong superficial judgments based on outward appearance, and the other on the sad consequences that come from attempting to find and maintain modern man's idea of perfect beauty.

"What Comes Around" by Jameson Currier
That birthday. "Forty is looming. You are approaching a time zone of trauma." Excellent short  rationalizing the pros, cons, and insecurities that come along with aging while alone.

"I Will Forget the Sound of His Voice" by Thomas Kearnes
Drugs & Sex. "Tweak makes you ambitious." "Curtis will likely shift, like a pianist from key to key, over to a new man. There will be no anger, no tears. I've survived the party scene over seven years. A simple rule: nothing lasts[...]" Excellent and pertinent short highlighting the party scene, drugs, sex and passing relationships.

"East Tenth Street, 1999" by Nicholas Boggs
Independence. A rather truncated short focused on a young man whose sole goal is to gain independence from his family when he finally gets that coveted apartment inherited from his uncle in the City. Excellent writing style, but it left me wanting more.

"Don't Tell Me" by Chip Livingston
The Breakup. A good but very short story about the heartbreak that comes as the result of a breakup, as seen from the perspective of the one left behind.

"Body and Mind" by Eric Sasson
Commitment & Cheating. "Why did affection have to be the death knell of lust? What is it about hugging Hunter that makes Andy's dick limp? Or rather, not limp, but awake for the briefest spell, like a bear that peeks out of his cave only to decide his winter isn't over." Does affection kill a relationship? A very good piece that effectively explores the subject of cheating when sex life turns stale between committed partners.

"Boy, A History" by Saeed Jones
Sexual Discovery & Identity from African American perspective. A complete short with an excellent rhythmic writing style where the author depicts violence and abuse as his character goes through the process of sexual discovery and a search for identity.

"Irrespective of the Storm" by Mark Ameen
1980's Gay Lifestyle & AIDS. "Irrespective of the storm, the soul struck by lightning time and again, throughout the abominable Eighties there they were: compact, beautiful men spreading the cheeks of their asses on beds of gently rushing water." An excellent retrospective highlighting the gay lifestyle in New York City during the 1980's. The author focuses on lifestyle, places, relationships, and hookups, ending with the AIDS epidemic. I loved this one.

"This is Love" by Stephen Graham Jones
Gay Bashing. The speculative fiction version of gay bashing, this story is haunting and ohhh so sad!

"The Origin of a Fiend" by Hal Duncan
Killing the Secret. "You'll never forgive the fact that the world's first homo superhero is no sooner out than he's suffering and dying. You'll never forgive, never forget, never. . . " A rather complex comic book-based story with much to offer. This is the brilliant Hal Duncan we're talking about so I may have to read this story again. Enough said.

"The Bloated Woman" by Jonathan Harper
Dangerous Liaisons. A young man goes to a coast town to take care of an old professor and hooks up with an older, local man. I have read Harper's story twice now and it left me wanting to read it again. It is certainly memorable!

"Cinema Love" by Aaron Chan
Looking for common ground. I have one word for this romantic love story: sweet!

"Ghost Water" by Casey Hannan
The Closet. I absolutely love the atmosphere and setting, and the excellent way in which the author gets to the point of his story with few words.

"The Theater of the Floating World" by Simon Jacobs
Obsession. "I wasn't much better off. I was here to pay for sex. I was as desperate as anyone else." I loved the setting and found the Asian focus quite interesting. There is an air of desperation and obsession that makes this a disturbing, memorable read.

"Farewell to Wise's" by William Sterling Walker
Moving On. "There's nothing for you in this city anymore. No opportunity. No more turkey, girlfriend. The buffet is closed. You need to move on to something else. Save yourself. Get out while you can. You've been too complacent. You need to see the world. You've been on the party jag too long." Lord, did I love Farewell to Wise's! I love the atmosphere. The relationship between the characters is so marvelous that they came alive for me, and the way the author makes his point is excellent. What more can I say?

"Next Year at Sonny's" by Eddy Sarfaty
Family, Friends, Lifestyle. "You're a good kid." "I'm forty-six." "You'll always be a kid to me," she says as she pats my cheek." Sarfaty writes a funny, heartwarming, and thought provoking essay using what has become a traditional Passover with "the boys" at Eddy's mother's home in Long Island as a setting. A must read.

"How I Learned to Stop Worrying and Have Sex in Gay Art Porn" by Peter Knegt
Body Beautiful. "I spent a lot of my adult life so far feeling threatened by my own body and by my own sexuality," I said. "But I think I've come pretty far in that regard." "[...] I thought about how life had brought me from being a gay little boy in a small town dancing to "Under The Sea" in his living room to a gay little man rapidly drinking pints of beer in a gross San Francisco gay bar awaiting his debut as a pornographic actor. I felt oddly proud of this progression." I was touched by the intimacy of thought and truthfulness in Mr. Knegt's essay. I love both the progression and the end of this essay!