Review: True to the Law by Jo Goodman 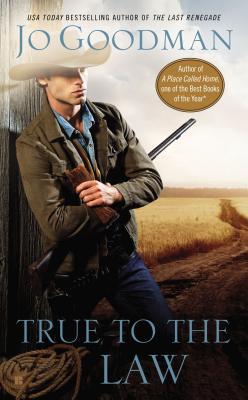 August 1889, Chicago: Cobb Bridger, private detective, is hired by Andrew Charley Mackey III of the wealthy Mackey Chicago family to find thief, Gertrude Morrow. The instructions are clear, "find her," inform Andrew Mackey of Ms. Morrow's whereabouts and hold her in place at all costs.

Cobb tracks Ms. True Morrow down to Bitter Springs, Wyoming where she has been hired as the new teacher. What he finds is a smart, beautiful woman dedicated to her work, one who doesn't hide her personal or employment histories with the Mackeys. She is not a runway. Cobb inserts himself into all aspects of Tru's life and begins the process of getting to know her. It's not a hard task as a mutual attraction is obvious from the first time they meet. Intimacy is not far behind as Cobb and Tru begin a tentative friendship that leads to an illicit affair. Soon Cobb begins to suspect that although at times True displays guilt or unusual reactions when her ex-employers are mentioned, she may not be a thief. But what other reason would Mackey have for tracking down the beautiful teacher?

True to the Law is a warm western historical romance with a small western town atmosphere and a romance between two people whose attraction quickly leads to the bedroom. Unfortunately, this couple lacks chemistry, both outside the bedroom and between the sheets. That surprised me because Goodman is usually great at building up sexual tension. They do, however, forge a connection through conversation, and a personal give and take that makes for a heartwarming relationship filled with humorous moments.

Although the romance falls on the average side of the spectrum, the western historical atmosphere is well established with great secondary and periphery characters that make up the town of Bitter Springs, Wyoming. This story doesn't involve cowboys or wild shootouts, instead it evolves around the mystery behind Tru's life as companion to the wealthy Mackey family matriarch, and what happened after the lady died to instigate a pursuit by the Mackey family.

Cobb's role as a detective working for the Mackeys ends at one point, but continues for the duration of the story after he accepts the position of town marshal. As his attraction grows, so does his protectiveness of Tru. The villain of this piece is easily identified and the mystery easily solved by the reader, so there is little thrill there. However, I enjoyed the purely fictional western climactic scene.

True to the Law is a stand-alone, however, the town of Bitter Springs and most of its residents are introduced in The Last Renegade, the first book in this western historical series by Jo Goodman. That book is a terrific read, so I recommend it as an optional first read.

For those of you who read The Last Renegade, secondary characters Rabbit and Finn are part of this story and again they steal every single scene where they appear! I love those boys. My favorite quote of this book is by Finn. He's at the school, pulls Priscilla's braid, and Ms. True Morrow asks him if he has anything to say to Priscilla. Here is his response:


"[...] Prissy, that pigtail is nuthin' but a temptation. And now that I heard you squeal, well, giving it a yank now and again is a thing that can't be resisted." He risked a glance at Miss Morrow. For reasons he did not entirely understand, she looked as if she going to choke on her spit. "That's all I got to say, ma'am."

True to the Law is a somewhat average romance with some great secondary characters and western atmosphere. I found myself enjoying the chemistry between the townspeople of Bitter Springs and the humor that permeates the pages of this romance despite the lack of chemistry between the main couple. This is not one of my favorite Goodman romances, but still, if you are a fan you might enjoy this installment in what I think of as her Bitter Springs series. I look forward to the next book, particularly if Rabbit and Finn are part of it.

Series (related book):
The Last Renegade
Posted by Hilcia at 9:06 AM