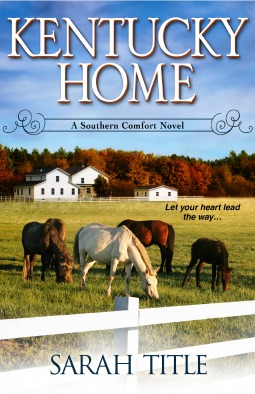 I was in the mood for a nice, comfy contemporary western romance and Kentucky Home by Sarah Title seemed like the answer to me. I ended up with mixed impressions about Sarah Title's debut novel.

It begins with Luke Carson and Mallory Thomson. They meet while she is married to a doctor with an ego the size of Manhattan, a man who has been psychologically abusing Mal for years and ends up physically assaulting her when he finds out that Mal is looking for an apartment to move out of their condo. This is when Mallory finally decides to really get away from her husband Michael and goes to her friend Luke for help. Luke's brilliant "plan" is to hide her at his family home, the Wild Rose Farm and Stables in Kentucky, until Mal can get her life together. Unfortunately, Luke's plan places Mal in an awkward position as her new "start" in life begins with they agree to lie and show up in Kentucky pretending to be a newly engaged couple.

The awkwardness continues as once there Luke basically dumps Mal on his family and takes off the next day for places unknown, supposedly for one week, and leaves her to deal with a less than welcoming family: cranky father Carl, headstrong sister Holly, sweet housekeeper Miss Libby, and Luke's reclusive, widower brother Keith. The Carson family is not happy about Luke's dumping and Mal feels less than welcomed. She wants to help around the farm, but Mal is a city girl unaccustomed to farm life and makes mistakes that do not impress these folks Not a good beginning.

The Carson family's "down home Kentucky hospitality" is really lacking in the beginning. This family was quite rude to Mal. I mean, even taking into consideration the fact that Luke dumped her on them, she was supposed to be his fiancé. A bit of courtesy? Yes? Thank goodness for Ms. Libby. She at least tried to make the poor woman feel welcomed. Mal herself didn't help things and I wondered about her social skills more than once during the first part of the book, but she was traumatized by all the changes so to me her awkwardness was understandable.

As opposed to my initial impressions when I read the introduction, Keith is the male protagonist of this piece, not Luke. I admit that bit through me for a bit -- Luke is a charmer and I liked his point of view in that initial introductive section. But let's move on to his brother Keith. Keith has been a widower for over 3 years and he is still basically in a deep depressive hole. He is still grieving, deeply, and refuses to socialize or seems unable to move forward. This is an unhappy man. But Mal wakes him up! His brother's fiancé. And Mal, who is not yet over the trauma of her abusive marriage to Michael, begins lusting after Keith the second she meets him. Not a good thing. Hostility takes over when sexual frustration and guilt ensue on both sides. Back and forth.

I don't know. The lies cause unnecessary grief. Then there is Mal's traumatic marriage to Michael. She is separated, but still married and quite traumatized by years of abusive behavior that began in college, progressed through the years Michael went through medical school, began his successful practice and to the present. This was a long, established relationship and marriage. Those years left Mallory feeling like a rag, her self-esteem shot to hell! And, there is Keith who is obviously still grieving. This is an ambitious romance with some tough, challenging issues, yet, to me, it felt like a light read with many witty moments thrown in along with Mal's numerous crying jags and Keith's guilt over his lusty feelings because he was betraying his dead wife and his brother. Oh boy!

This is the reason I'm mixed up about this novel. I laughed. I couldn't help it. There are funny scenes involving a three-legged dog, Mel's horrible blond dye job with brown roots, and all the sneaking around Mal and Keith go through to get laid. After all, there is nothing wrong with wit and humor to lighten up the harshness of life. Keith falls for Mal like a two-ton truck and overcomes his grief. I like the way this part of the romance is executed. After loving and grieving for three years, he deserved a second chance at love.

Mal's issues on the other hand? Hmm... as far as I'm concerned Mal's trauma goes deep after what seems a lifetime of dealing with an abusive, narcissistic asshole. In this novel she begins to recuperate from that trauma and to get a sense of herself, but, BUT. It became obvious, to me at least, that she needed more time to find her own two feet before getting mixed up in another relationship and that didn't happen here. Mal is not allowed that time on her own, instead another man becomes the solution to the problem. Additionally, the resolution to the Mal/Michael situation is over the top and Mal's involvement, underwhelming. I understand that this is a romance, yet, I guess these days I expect a better executed resolution from a contemporary romance when it comes to issues like a woman (or a man) recuperating from an abusive marriage or any type of abuse for that matter.

Kentucky Home is a cute and light contemporary western romance. There is chemistry between the protagonists and the initial premise is good, if ambitious. Unfortunately, the author overreaches by introducing one too many heavy issues to contend with, and fails to execute on the one key issue that would have given this romance depth and the storyline, plausibility.