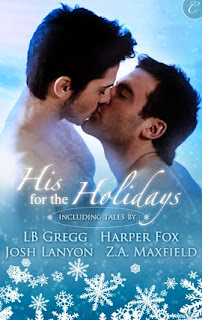 His for the Holidays is a collection of four male/male romance Christmas stories. They are all as different as the authors' writing styles, yet all fit the title of the Anthology and provide happy endings set during the holiday season.

Mistletoe at Midnight by LB Gregg


Owen McKenzie has traveled to Vermont to spend an old-fashioned Christmas with his family when he finds himself staying at the same inn as his first love. Owen is disconcerted to realize he's still attracted to Caleb Black but refuses to pursue him. Caleb left him once, and Owen's not going down that road again.

Caleb is ready for a second chance with Owen and gets it when fate and the matchmaking McKenzies conspire to strand the two men in a rustic cabin during a snowstorm on Christmas Eve. Can Caleb convince Owen to rekindle their romance so they can stop spending their holidays apart?

Owen McKenzie is traveling to an Inn in Vermont to spend the Christmas holidays with his family, the meddling McKenzies. His life has undergone recent changes after a break-up with his long-time boyfriend. On his brother's recommendation, Owen purchased a home and is moving from Boston to this small Vermont town where he'll be opening his own veterinarian practice. When Owen arrives late at the Inn, to his jaw-dropping amazement, there in the middle of the McKenzie Christmas revelry is non other than his first high school crush and love, Caleb Black.

Mistletoe at Midnight is a story of first-time lovers reunited. Caleb and Owen, although separated when young, never stopped thinking about each other or being influenced by their experience together. That one relationship affected all others in their lives, particularly in Owen's case. I loved the way LB Gregg weaved a sweet and passionate romance that was still full of amusing family moments and holiday atmosphere. There were conflicts to be resolved and the revelations came slowly but surely. I enjoyed this traditional, family Christmas romance from beginning to end.


Detective Inspector James McBride is riding high on the belief that he's about to bust a human-trafficking ring. But just five days before Christmas, his unorthodox methods catch up with him and his world comes crashing down.

McBride tries to concentrate on his new day job as security for the visiting Israeli ambassador. He even starts to feel a renewed sense of self-worth when the leader of the Israeli team, the aristocratic Tobias Leitner, takes a bullet for him in the line of duty. But he can't forget the trafficking case, especially when his investigations result in the kidnapping of his own daughter! McBride has no one to turn to for help-no one, except Toby.

Can these two very different men work together to bring about a holiday miracle-and heal one another's heart in the process?

Nine Lights Over Edinburgh by Harper Fox is a holiday story with edge, drama and in the end, hope. I must admit that both plot and characterization grabbed me from the beginning. There's a lot going on in James' life. He is coming to terms with his sexuality after having been married and divorcing many years later, his life is spiraling out of control due to heavy drinking, and to top it all off his career has unexpectedly taken a downward turn. The only light in his life seems to be his daughter. He meets Tobias Leitner and his life will change forever.

James' personal problems, sexual history, the romance and action are all weaved together quite well. By the end of the story I felt as if I knew James and I loved the way he and Tobias found each other in the midst of all the chaos in their lives. James is one of those flawed human characters with redeemable qualities that I enjoy so much, and his happy ending was hard-earned in this holiday story. I also must mention how much I enjoyed Edinburgh as the setting for this novella. Harper Fox's description of the city aided with giving the story atmosphere and the characters a certain realistic touch. This is my first read by this author, but it certainly won't be my last.

I Heard Him Exclaim By Z.A. Maxfield


Steve Adams's heart hasn't been in the Christmas spirit ever since doctors put a stent in it and ordered him to clean up his act. No longer filling out his Santa suit or allowed to make merry, he's forgoing the holidays this year and heading to Vegas to indulge in the few vices left to him: gambling and anonymous sex.

His road trip takes a detour when he encounters Chandler Tracey, who's just inherited guardianship of his five-year-old niece. Overwhelmed, Chandler's on his way to deliver Poppy to his parents. But fate has other plans and, after car trouble, Chandler and Poppy accept a ride home with Steve. Though the heat between the two men is obvious, they put it on simmer while they band together to make Poppy's Christmas as perfect as possible.

Steve soon comes to believe that while Chandler is the right person to look after Poppy, someone needs to look after Chandler. Fortunately, Steve knows just the man for the job.

I Heard Him Exclaim by Z.A. Maxfield is quite the Christmas smorgasbord. We have Steve who plays Santa every year and seems to be a bit confused between what's real and not when it comes to playing the role. After the doctors ordered him to lose weight, he became depressed because who likes a skinny Santa? Then we have Poppy, a little girl who recently lost her parents in a car accident. And last but not least, we have Chandler, Poppy's uncle and guardian. He is over protective and over cautious with her to the point where he is so exhausted and overwhelmed, he has decided to give her up to his parents. These three people meet on the road after Chandler's car breaks down and Steve takes them home where they spend Christmas together and meet Steve's extensive and over-the-top family.

There's a lot of chemistry between Chandler and Steve with a touch of a bear-like attraction going on between them. Both men find what they need from each other. For Steve, it's reassurance that losing the weight won't stop him from performing his Santa duties and for Chandler, the realization that he's the right person to take care of Poppy. Personally, I had a few problems with the story. Due to Chandler's overcautious nature and protectiveness of Poppy, I thought it was out of character for him to get in a stranger's car (no matter how safe he seemed) and take that type of risk with her. I also thought Steve's Santa-like psychological obsessiveness was glossed over to achieve that happily ever after. However overall, this is a sweet Christmas romance.


On the eve of the new millennium, diamond thief Noel Snow seduced FBI special agent Robert Cuffe, then fled into the dawn. Now a successful novelist, Noel uses his capers as fodder for his books, and has modeled his hero's nemesis (and potential love interest) on Cuffe. Though he leaves Robert a drunken phone message every New Year's Eve, Noel hasn't seen or heard from him in a decade.

So he's thrilled when his former lover shows up at his upstate farm one Christmas Eve. Elation quickly turns to alarm when Robert accuses Noel of being responsible for a recent rash of diamond heists. Robert is all business and as cold as ice: it seems his only interest in Noel is to put him behind bars.

Innocent of the crimes, and still as attracted as ever to the oh-so-serious lawman, Noel plans a second seduction-providing he can stay out of jail long enough!

Icecapade by Josh Lanyon is the shortest novella in this anthology, although that certainly doesn't preclude it from being an excellent addition. A story of a retired cat burglar turned successful author and the FBI agent who pursued but never caught him and later became a recurring character in the cat burglar/author's books. During one of his escapades, cat burglar Noel seduced staid FBI agent Robert on a New Year's Eve and has never forgotten their passionate encounter. Ten years later on Christmas Eve, Robert shows up at Noel's horse ranch accusing him of new jewel heists and giving both of them an opportunity to get reacquainted.

I loved this story. Lanyon uses loneliness and a bit of longing to set up the romance between these two men. There's chemistry and you can feel the sexual tension between the two men as soon as Robert steps through the door. I loved the way this couple really gets to know each other, even though they already knew so many details about each other's lives. Well written and developed, this short story was a treat and a perfect fit and ending to this Christmas anthology.