Review: Cowgirl Up and Ride by Lorelei James 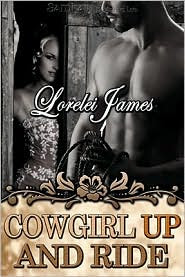 Cowgirl Up and Ride is the story of Cord McKade and Amy Jo. AJ has been in love with Cord forever (since she was 5 years old, so she says), but he's 13 years older and sees her as too young -- I mean she used to be his son's babysitter for goodness sakes! Now she's 23 and decides it's time to go after what she wants, time to get noticed. Shy, wholesome AJ is no more. Cord is divorced and the single father of a little boy. He has become a bitter and lonely cowboy who doesn't have much to do with women. It's all his ex-wife's fault. She up and left him after their son was born for Seattle because she couldn't make it as a ranch wife in Wyoming. Now all he cares about is raising his son and running his family's ranch.

The secondary characters who take part in Cowgirl Up and Ride, other MaKade's, are also developed and they contribute to this story -- they were not just thrown in there. We can also see the beginning of their individual stories taking shape, but don't take away from Cord and AJ as central characters.

You can visit the author & read excerpts for her books here.
Posted by Hilcia at 6:00 AM