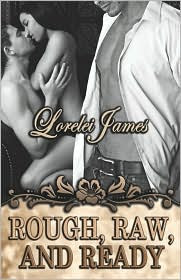 Torn between the love he has-and the love he's always wanted. A Rough Riders book. Chassie West Glanzer hasn't been a stranger to drama and tragedy. A year of wedded bliss to sexy-as-sin cowboy Trevor Glanzer has brought her the happiness and contentment she never thought she'd find, and mellowed Trevor's rodeo wanderlust.
Then Trevors old roping partner ambles up the driveway and Chassie's life changes drastically. Trevor never expected to see Edgard Mancuso again, after it became clear he couldn't be the man Edgard needed. Now Edgard is back from Brazil to sort out their tangled past, and Trevor is plagued with feelings he thought he'd buried over three years ago.
Although Trevor is hat-over-bootheels in love with his sweet, feisty wife, the sense his life is missing a piece has always gnawed at him. Chassie's shock that Edgard and Trevor were once lovers turns to fear of losing her husband. Or worse, fear that Trevor will stay with her only out of a sense of duty. Yet as the three of them spend time together, the sins of the past blur and fade, leaving raw emotion and unbridled passion. Passion that could heal-or cause irreparable damage to their future.

The story of Chassie, Trevor and Edgard is an excellent M/M/F by Lorelei James. All three characters in this book have been introduced in previous books. Trevor & Edgard were an integral part of the plot in Long Hard Ride, Book #1 Rough Rider series, and we know from that story the two of them had a long 2 1/2 year M/M relationship. Their relationship ended when Edgard could not deal with Trevor's bi-sexuality and lack of commitment to their relationship. At the end of that book, Edgard returned to his home in Brazil.
In the ensuing years, Trevor met and married Chassie West, a cousin to the McKades, and he loves her passionately. The book begins when Edgard returns from Brazil and shows up at Trevor and Chassie's ranch. Edgard needs to know if there is anything left of the love he and Trevor shared. However, Trevor has not been truthful with Chassie and Edgard comes as a shocking surprise to her. Trevor, Chassie and Edgard have some tough decisions to make.
I was pleasantly surprised in how well James captured the turmoil and emotions that these characters go through. All three of them go through many changes in this story, yet nothing seems rushed or left hanging. The plot is developed slowly and sure enough by the end of the book, these three people become a unit. Trevor works through his ambivalence, Chassie through her doubts and Edgard through his feelings of regret. There is no question in my mind at the end, that they are one happy threesome.
This is not easily accomplished in an M/M/F. I've read quite a few and usually the males, especially if (as in this case) they've had a previous relationship, seem to have the strongest attraction, while the female is usually kept on the periphery. She usually is attracted or attractive to one of the males, but not the other. I thought that's what was going to happen here, and for a while it did. However, by the end, Ms. James had skillfully made me believe in this threesome.
James did a very good job of balancing the emotions and the erotic in Rough, Raw, and Ready -- the erotic part of the book is hot, hot, hot - all of it -- the M/F, M/M and the M/M/F. But as much as I enjoyed all the sexual scenes in this book, where James is once again at her best, the development of the emotional relationship is what really kept me invested in the story. Another favorite in the Rough Rider series by Lorelei James, this installment convinced me to go on to read the next in line, Branded as Trouble, Book #6.

Visit the author here.
Posted by Hilcia at 11:56 AM