Review: The Mountains of Mourning by Lois McMaster Bujold 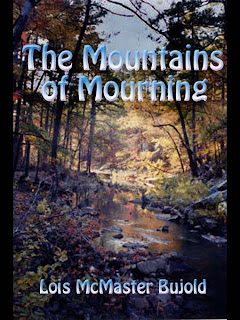 
The Mountains of Mourning was originally published as a stand-alone novella in the May 1989 issue of Analog. It was then included as the first of three novellas that make up the novel Borders of Infinity (October 1989). For the novel, Ms. Bujold added a short "framing story" that tied the three novellas together by setting up each one as a flashback that Miles experiences while recovering from bone-replacement surgery. The other two novellas are Labyrinth and The Borders of Infinity.

Here's a short story I highly recommend for those who have not yet read Ms. Bujold's work. It is science fiction, yet this short is written as more of a detective story. The setting is Barrayaran, Miles home planet, and sufficient details are provided to give the sci-fi feel to the story without it overwhelming the plot. The focus remains on Miles and the mystery he is attempting to solve.

Our story begins when a young woman from a mountain village comes to Prime Minister Count Vorkosigan's court to report a murder. This young woman, Harra, appears ragged, hungry and her anger has no limits. She reported the murder to the Village Speaker and he dismissed her accusation as nothing. She then went to lodge an appeal with the district magistrate, but he was absent from his office and not due to return for two weeks. Unwilling and unable to wait that period of time, she now stubbornly sits at the Count's doors and demands her right to be heard by her count's court. Harra wants justice!

Miles, son and heir to Count Vorkosigan, is home after graduating from the Academy and is on leave after receiving his new officer's commission in the Barrayaran Imperial Service. He is the one who comes upon Harra while she is being told by the guard to leave. He facilitates the audience she seeks with the Count.

They are in for a shock as they find Harra is not just reporting murder but a case of infanticide. The motives behind this horrible deed are clear to the Count, Miles, the Countess and Harra, who turns out to be the murdered infant's mother. Ignorance and old beliefs seem to be behind it all and the Count is determined to bring these incidents to an end -- for this is no isolated incident. Miles capabilities are about to be tested in more ways than one. He'll have to use his powers of deduction to solve the murder and he'll have to learn how to use his future overlord powers to impart justice.

I downloaded this short story on to my eReader from the Baen Free Library and it has been sitting on my TBR pile for a while, I'm sorry it took me so long to read it. This short is part of Bujold's novel "The Borders of Infinity" and the novel is part of a larger series about the Vorkosigans, but this short story stands alone very well on its own.

I want to clarify that The Mountains of Mourning is science fiction, not romance. Ms. Bujold manages to give enough detail about the Vorkosigans and their world to make this not only an interesting read, but to also hook the reader into wanting to know more about them, certainly more about Miles' "damaged" character, his trials, tribulations and triumphs. It is an excellent who-done-it with an arresting plot and unforgettable characters. I was definitely hooked.

I already have the other two short stories that make the "Borders of Infinity" novel, plus the book that introduces Miles, Book #1, "The Warrior's Apprentice." I can't wait to find out if the other books have the same quality when it comes to both plot and characterization, plus I really want to explore this world Bujold created.

Find out more about Lois McMaster Bujold here.
Posted by Hilcia at 12:34 PM