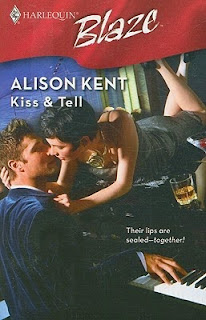 The February theme for Wendy's 2015 TBR Challenge is "Recommended Read." Kiss & Tell seemed like the perfect choice. The ebook has been sitting unread in my Kindle since 2009 because a friend, a big Alison Kent fan, recommended the author's works. Additionally, I am in the mood for spicy contemporary romances and this book fit the bill.
----------

We have Miranda Kelly, a lovely, sexy woman keeping a few secrets about her past and present and Caleb McGregor, a man of dubious character in what seems to be a permanent sexual haze. This Harlequin Blaze is made up of secrets and a hot, sizzling fling that takes place in a week's time.

I am not giving away spoilers by including the following information as it is included in the book summary. Miranda is keeping two secrets: she moved back to her hometown to hide after having been hounded by the media during a very public divorce. Additionally, since coming back home, by day she is a florist at her own shop and by night, Candy Cane a sexy singer performing incognito at Club Crimson where she wears wigs and sexy costumes to hide her true identity. Club Crimson is where she meets Caleb McGregor who is in town to attend a wedding. Miranda hasn't been with a man since her six year old divorce and Caleb, who falls in lust on sight, catches her eye. With a song and a kiss, the two embark on a steaming hot fling that places Miranda's secrets in danger of discovery and her heart on the line.

Caleb and Miranda embark on an adult relationship, a sizzling affair with certain boundaries and a time limit. They both understand the limits and stick to this understanding even as their feelings for each other begin to change. There are no misunderstandings between them -- and no whining during or after! During their time together this couple spends plenty of time having sex or engaged in sexual play, but they also take the time to get to know each other, slowly revealing their secrets to each other. There are good, valid conflicts and the paths taken to resolve them are not overly dramatic. Most of all I enjoyed the fact that these two people like each other. In this case the adult factor wins.

There is also a secondary storyline pertaining to Miranda's best friend and her two daughters. This storyline is peripherally intertwined with the conflict that crops up between Miranda and Caleb -- Caleb's secret. As a reader I became invested in the secondary characters' conflicts, unfortunately the resolutions to their problems are glossed over and kept off the pages. My second problem comes with the time line and how it affects the central romance between Miranda and Caleb. One week of lusting, hot sex, keeping secrets, and final revelations strikes me as too short a period to achieve a happy ever after.

So far, Alison Kent's romances have been mixed bags for me. I enjoy the characters and romances. Kent writes some steamy sexual scenes that are off the charts, as is the case in Kiss & Tell and I find her adult romances very attractive. However, my experience to date shows that somewhere along the line some aspect of the storyline is left under-developed. Of course this is an older book as are the other books I have read by this author. I need to pick up a current release to find out if there is a difference in execution. Recommendations anyone?