Review: Entreat Me by Grace Draven 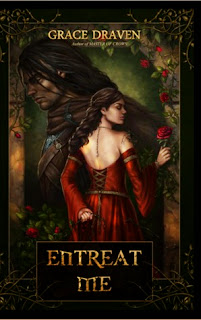 Entreat Me by Grace Draven was chosen as the February read for my Internet Book Club -- an interesting choice.

Grace Draven utilizes key, recognizable elements from the Beauty and the Beast children's fairy tale to create an adult fantasy romance with unique central characters. She splits both Beauty and the Beast into two couples by having Louvaen Duenda and Ballard take on the adult, experienced central role while Cinnia and Gavin play the young romantic (beautiful and virginal) secondary one. Intermingled with the romances, at its core, this is also a beautiful father and son tale of love and sacrifice.

On the romantic front, Lou and Ballard take center stage. Lou is no sweet Belle, instead she is considered an indomitable shrew -- there is no taming her. A widow, Lou is strong, determined, and brave, making her the perfect candidate to serve as protector to her weak father and beautiful sister Cinnia against the local villain. When she follows her impulsive sister to the magically hidden castle that Gavin calls home, Lou is better prepared than Cinnia to deal with Gavin's father Ballard and the cursed situation as a whole. Ballard, like the Beast from the original fairy tale, will break your heart. His sweetness and sacrifice for love trumps beastliness. His shame, resignation, and yearning for Lou will make an impact on fairy tale and romance lovers alike. Sex scenes abound in this story -- not a complaint, just surprising.

The romance between Gavin and Cinnia is definitely secondary. They play the more traditional role found in fairy tales. His is the extremely handsome and honorable role of a troubled prince, and hers is that of the poor, virginal, but extreme beauty who garners attention from miles around and incites the lust of a villain. Gavin falls for her and attempts to save the beautiful lady in distress by whisking her away to his magic castle in hopes that she in turn will save him and his family from an old curse. Draven chooses to have two very different romantic couples in this story fighting similar conflicts. Gavin and Cinnia work well as secondary characters, unfortunately, the connection with them as a couple is tenuous. This is mainly due to the fact that their relationship develops on a superficial level, lacking intimate (one-on-one, on the page) details as it evolves.

The sweet and sour dialog between the central characters is engaging and entertaining. The secondary characters also have a lot to offer in that respect. The slower moments, the happy ones, in the middle of the book flow with their friendship, loyalty and love. The magic aspects of this story feel organic to a fairy tale with some details taken directly from the original Beauty and the Beast, while others are incorporated by the author.

The father and son tale of love and sacrifice plays a key role in this fantasy romance. It is intermingled with the curse and the situation faced by the couples. Short flashback sections are utilized throughout the story to give the reader the complete picture while the characters -- Lou and Cinnia -- remain in the dark. Key to the story as a whole, at times these flashbacks interrupt the flow. Regardless, the positives outweigh the negatives and I really enjoyed this story to the end.

I recommend Entreat Me to readers who love Beauty and the Beast, adult fairy tales, fantasy romances, unusually strong heroines as central characters, and strong bonds between fathers and sons.
Posted by Hilcia at 3:24 PM