… On Shield of Winter (Psy/Changeling #13) by Nalini Singh 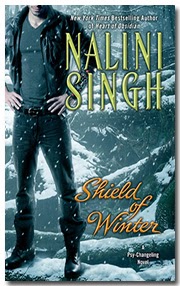 Shield of Winter is a transitional book in this long series by Nalini Singh. A much needed one with many threads to follow. First we have the overall story arc which drives all the other sub-plots, including the romance.

Overall Story Arc Summary: Silence has fallen and the Psy world in the midst of chaos. Kaleb Krychek has his hands full trying to avoid total destruction as the dark virus in the PsyNet spreads and threatens the world with violent psychotic breaks from the Psy and ultimately mass death for his people. Many are relieved that Silence is gone, but Krychek also has to deal with those who still want Silence or don't know what to do without it.

Kaleb can't afford to sit on his hands. He knows the Net is in danger of collapsing and that designation E Psys may make the saving difference. He entrusts his Arrows with a list of mature empaths that with some quick training may be able to help. He brings in the Changelings as allies by asking them for safe training ground in their territory. Krycheck goes further by investigating other possibilities and bringing in other allies, including the Forgotten, as well as Nikita and Anthony. It's all very political but surprisingly humane as Krycheck, Arrows, empaths, and allies take desperate measures to contain what could become a disaster of massive proportions.

Empaths: Singh brings in a new group of Psy characters who either have been hiding their empathic abilities their whole lives or were not aware of them. Their mission is to explore and expand abilities they hardly understand to fight darkness, corruption and madness on a psychic level as quickly as possible. Singh begins to further explore designation E and gives depth to her characters by making them individuals, introducing background stories and going as far as sub-dividing psychic abilities within the designation. I believe that a deeper exploration of empaths, one where they finally come into their own, will come along with Alice's story.

Arrows: The mysterious world of Arrows as trained assassins and soldiers is also fully explored. The Arrows are assigned to guard Es with their lives on a one-on-one basis. Their collective coldness and personal isolation serves as a big contrast to the colorful and emotional world of the empaths. Singh deeply explores the brutal, violent, inhumane training, as well as the Arrows' history of survival after fighting those who used their abilities to gain power, through Vasic and Aden's characters. There's a thought provoking quality to this sub-plot that comes from the soldier at war perspective that I believe Singh may continue to explore through other story lines with Arrows as main characters, i.e., Aden, but that I believe was truly well done in Shield of Winter.

Zie Zen, Aiden, and Secondary Characters: Through the Zie Zen character/thread, Singh brings into the open the history and magnitude of the Psy rebellion, and through Aden, the immensity of the Arrows's loyalty to one another. These two characters, although different in the way they show love, provide some of the most touching, emotionally connected moments in this installment. Judd and Sascha are also quite influential -- Judd with his care and loyalty for the Arrows, and Sascha with hers for the empaths. And who can resist Ivy's dog Rabbit?

The Romance: I need to make this point first. Vasic and Ivy are not carbon copies of Judd (Arrow in Caressed by Ice) and Sascha(Empath in Slave to Sensation). Singh doesn't repeat herself and I am very happy that she didn't do that with Vasic and Ivy. Who wants to read about the same characters with the same conflicts over and over again? I don't! In that respect, I am not disappointed.

Ivy doesn't know she's an empath and has been through a form of rehabilitation to fix her. But she's not broken, instead Ivy is a joyful, hopeful woman who has benefitted from being loved by her parents throughout her life. Vasic's coldness and emotional isolation call to her empathic senses and it doesn't take long before she's longing to warm up the Arrow assigned as her personal guard. Vasic cant feel anything. He's on the edge and almost broken from guilt and despair. Ivy gets under his skin. He has never met anyone like her and doesn't know what to do when Ivy begins to push his boundaries. As the two battle the Net and the madness affecting the Psy, Vasic's cold walls begin to crumble in the face of Ivy's loving warmth. But can she walk with him in his personal darkness? Will she understand his past actions? Will she survive the onslaught of the Net's Dark Mind?

This romance is woven into the overall story arc and Vasic and Ivy spend a lot of their time in danger, battling and working on strategies to defeat the darkness. Their intimate time together is beautiful, and I like that as individuals they don't play games about how they feel about each other. I think that is because neither is capable of hiding. But those beautiful times are limited, and other, more significant sub-plots and characters, take the focus away from Vasic and Ivy. So in the end, although I love what there is of Vasic and Ivy together, the romance becomes another sub-plot in this installment, albeit, one where the two characters are an integral part of that all-important overall story arc.

Epilogue: Epilogues can be great or they can damage a great read. In this case I loved it. The Psys are evolving and the whole world will have to evolve with them. There have been changes in Singh's Psy/Changeling world and there are more changes to come -- dangerous enemies, chaos and instability to overcome, but there's hope and love too. Now we wait for the next book. :)
Posted by Hilcia at 1:46 PM