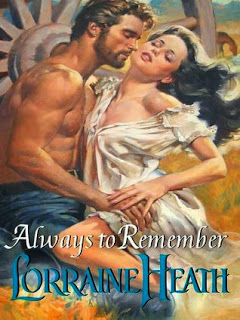 June's theme for Wendy's TBR Challenge is Romance Classics. A few years back, I became a Lorraine Heath fan and ended up reading and collecting quite a few books from her backlist. As it turns out, I had the book that won the 1997 RITA award for Lorraine Heath under the Short Historical category, Always to Remember. After reading it my thoughts were, if this is not a classic, then it should be!

I found Always to Remember unique. It is short, only 100 pages, yet it reads like a full-length novel with none of those missing elements sometimes found in short works. Heath achieves this through her focus on courage, in this case using civil disobedience coming from a conscientious objector. The romance, between two people with very different ideas about the meaning of courage, is driven by the same focus and different beliefs. As a result, she creates some pretty amazing central characters who must overcome truly difficult hurdles in order to find happiness, and also makes the best out of secondary characters and setting -- small town Texas, during the post-American Civil War era.

Always to Remember is set in Cedar Grove, Texas. This small town is steeped in a dark well of never-ending grief that has turned to brutal hatred and bitter, irrational resentment of Clayton, who lives while their sons, brothers, and husbands died bravely at the Battle of Gettysburg fighting for the Cause. Clayton, the town's coward and pariah, serves as a constant reminder of their own loses. Even one of Clayton's brothers repudiates him as a coward. No one, except for the town's doctor bothers to ask him or tries to understand why he refused to fight. But no one hates or is more contemptuous and bitterly resentful of Clayton than Meg Warner, Clayton's best friend's widow.


"I will not take up arms against my fellow man."

"I didn’t believe we should fight the Northern states, and yet, I could not in all good conscience take up arms against the South, my home, and my friends. But more than that, I would not fight because I believe it’s a sin against God to kill another man."

Clayton is a conscientious objector with strong beliefs and the courage to fight for them. So when his best friend and the boys he grew up with volunteered and rode to war in a blaze of glory, strongly believing in the Cause -- that of Texas seceding from the Union -- Clayton stayed behind. And later when conscribed by the Confederate Army, nineteen year-old Clayton refused to fight and was sentenced to death. Unable to shoot him after hearing Clay's last Christ-like prayer, superior officers confined him to prison and torture until the end of the war when Clayton decided to come back home.

Meg Warner lost her beloved husband Kirk and three of her four brothers. Like the rest of Cedar Grove, she centers all of her grief and hatred on Clay. She doesn't speak or acknowledge the man, but decides to punish Clay by forcing him to admit cowardly actions and betrayal of his best friend Kirk. To do so, she commissions Clay to create a memorial of the town's heroes and insists on witnessing the process. But as she witnesses the process, Clay surprises her with his fantastic talents as a sculptor, his humanity, sensitivity, capability for forgiveness, and relentless courage, and after some humiliating, contentious events and conversations, Meg slowly begins to change her mind and to see Clay clearly.


"You think the only battles fought are done so with rifles, and the only wounds that kill draw blood. You think courage is loud, boisterous and proud."

Heath's hero is not perfect, but he approaches perfection at times. He's a "turn-the-other-cheek" type of man, and believe me that other cheek gets slapped over and over again by everyone and his own brother. But while Clayton is a memorable male character for his courage and refusal to give up on his beliefs in the face of torture in and out of prison, he also makes an impact as a romance hero with his shy, virginal, tenderness and a deep loneliness that he will break any woman's heart.

Clayton's characterization could have been a total turn-off, but Heath makes it work by balancing his characterization with Meg's. She is less than perfect, as a matter of fact Meg is truly hateful at times, but Heath does a fantastic job of humanizing her. Additionally, it is through Meg and the town's perspective that the reader gets the full scope of what this short historical romance is really all about.

As a romance, Always to Remember is contentious, tender, and passionate with a beautiful happy ever after and a sweet epilogue. Throughout its development the conflicts between the protagonists and secondary characters are thought provoking. I said above that Heath focuses on courage to develop the entire novel, but in the end it is also a redemptive read, one where not only Meg but the people of Cedar Grove, find what they need to go on with their lives. On a personal note: I really liked this book by the time I finished it, but it stayed with me, and the more I processed what I read, the more I loved Heath's execution. So Always to Remember goes on my list of highly recommended reads. If you haven't read it yet, give it a try.


"Within the shadows of honour, courage often walks in silence"