Review: In Want of a Wife (Bitter Springs #3) by Jo Goodman 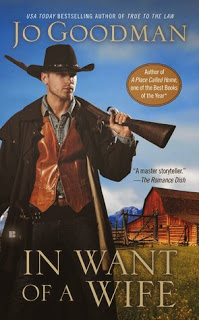 I absolutely loved The Last Renegade, but was not crazy about True to the Law. Thankfully, with In Want of a Wife the third book of her Bitter Springs western historical series, Jo Goodman returns to the kind of romance I've come to expect from her.

Jane Middlebourne is an orphan whose wealthy New York family rejected since childhood and barely tolerate as an adult. She finds her way out by answering an ad for a mail-order bride from Morgan Longstreet, a rancher from Bitter Springs, Wyoming. After exchanging letters and photographs, Jane works on an escape plan and takes a train West.

Having survived a rough, shady past, Morgan Longstreet is finally making a go of the Morning Star cattle ranch with the help of four hired hands, but he also needs a strong wife to help with work and hopefully be there for him through the good and the bad. Morgan is ready to propose when he finally meets Jane at the train station. Her beauty and delicate appearance, however, shock him into doubting that she is the right woman for him. Having burned all bridges behind her, Jane is determined to prove him wrong -- she is confident in her strength and the knowledge that she can be Morgan's perfect wife. But once they do marry, unshared secrets and unexpected revelations about their mutual pasts may ruin all hopes for a happy future.

In this novel, Goodman utilizes the mail-order bride trope to build the romance between Jane and Morgan, and she does it so well! Jane and Morgan are both direct, plain-spoken people who, as most of us tend to do, put their best foot forward while corresponding, but once they meet face to face, begin building a relationship by taking tentative steps. It all begins with conversations and questions that each answers with as much honesty as they allow themselves.

Both Jane and Morgan led a hellish sort of life before meeting. And yes, they have issues to work through, but what I loved about this pair is that they are both hopeful and still believe that they can find happiness. These are not bitter unforgiving souls. On the contrary, as all their secrets begin to surface in a well-timed progressive manner, each holds back but slowly reveals hidden depths to the other that strengthens what began as a fragile connection. These conversations lead to intimacy, and intimacy leads to desire.

Once intimacy and desire are recognized by Jane and Morgan, a passionate connection is established between this couple. Initially, Jane displays insecurities about her person as a result of her upbringing and past events, just as Morgan is doubtful as to how he should approach Jane physically because his past experiences don't lend themselves to understanding a woman like Jane. Yet, once they are together, Jane is honestly open in her desire for Morgan and he is just bowled over by Jane. A Jane whose passion in bed only rivals her inner strength out of it.

Revelations about Jane's and Morgan's deepest secrets are necessary to build trust and intimacy. Did I have any problems with those revelations? No. However toward the end, there is a "miracle" that affects one of Jane's confessions. It bothered me enough to mention it. SPOILER ALERT (highlight to read): Jane and Morgan are both orphans. I am not a fan of "miracle pregnancies," but if they do happen, they should come with a viable explanation. Jane's miracle pregnancy did not make sense to me. In this case, I feel that adoption would have been a fantastic, more believable, alternative to her situation, and a missed opportunity.

Most of the story takes place at the Morning Star Ranch with few key scenes taking place in Bitter Springs. This limits the amount of secondary characters who impact the romance to the four hired hands and one caring but rather intrusive female character from town. However, throughout the whole story, there is a dangerous plot brewing that concerns Morgan's past. As this thread progresses, a different, less active supporting cast of characters from the town -- the Sheriff, a few limited townspeople, Finn and Rabbit -- actively participate up to its final western-style climax. And yes, Finn and Rabbit are as adorable as they have been from the beginning of this series. Providing light, chuckle-worthy moments, sometimes in the middle of some pretty tense scenes.

This is a character driven romance with a focus on the building relationship between the main couple throughout the majority of the story. The setting for In Want of a Wife is really the Morning Star Ranch and that right there made this a worthwhile romance read because although Goodman uses a dangerous plot with an exciting western-style climax and a mail-order bride trope to set up the western atmosphere, by the end there is no question that the love, passion, and peace shared by Jane and Morgan are all there to stay. Highly recommended.