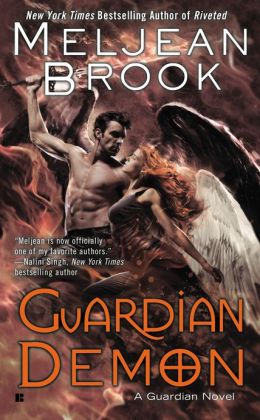 After a terrifying encounter in Hell destroys her trust in Michael, the Guardian’s powerful leader, former detective Andromeda Taylor is ready to call it quits as one of the angelic warriors and resume her human life again. But when demonic forces threaten her closest friends and she uncovers a terrifying plot devised by Lucifer, Taylor is thrown straight into Michael’s path again…

To defeat Lucifer, Michael needs every Guardian by his side—and he needs Taylor more than any other. The detective is the key to keeping his own demonic side at bay, and Michael will do anything to protect her and keep her close. And when Taylor manifests a deadly power, her Gift might tip the scales in the endless war between Heaven and Hell…or it might destroy them both with a single touch.

Guardian Demon is the last book in Meljean Brook's excellent paranormal romance series. This is a great read and an excellent ending to the series as a whole.

The introduction to Guardian Demon hooks the reader for what is to come. It begins as Andromeda Taylor attempts to save Michael from Hell after he's released from the frozen fields. Michael has become a ravenous, raging dragon whose hunger for consuming demons is never-ending. Andy becomes bait while Khavi waits to trap him, but once Michael comes to her, he shifts into a two-legged, dragon-like monster with minimal humanity left. She saves him, but Khavi's plans backfire and the end result is damaging to both Andy and Michael in unforeseen and unexpected ways. Andy finally gets Michael out of her head, but she loses any trust she had left for Michael, and Michael, well. . . he loses more than Andromeda's trust.

During the beginning of Part I the action continues, however, there are sections that are heavy with narration and internal thoughts. Everything is highly relevant to the story, Andromeda's and Michael's feelings and the methodical description of individual powers used by the already introduced Guardians. The result is an uneven pacing that slows down the story in this section. Additionally, Brook takes her time setting up the building blocks to develop the rather controversial relationship between Andromeda and Michael. In this case, the slow buildup works because otherwise the romance would not have been believable.

But, why controversial? Well, Andromeda believes that Michael initially raped her mind by invading it without her permission and she resents the heck out of him for doing so. What happened down in Hell when she saved Michael sealed her fear and lack of trust. Andromeda has so many grievances against Michael, and rightly so, that for a long while I didn't see how he would talk his way into her good graces. Michael and Khavi both messed up rather badly. So yes, building a believable relationship is slow, so don't expect quick love, or the insta-hotness found in some of the other installments. At least I didn't find that to be the case here... it was redemption first, trust second, love and hotness last. And there is hotness! Michael is as sexy as I expected and Andromeda is his equal. There is building sexual tension and then they burn up the sheets, the walls, the... hmm...

But what about the overall storyarc? In my review of Demon Marked, I questioned why some Guardians were compromising their principals, and particularly Khavi's manipulative role. Well, Brook does not disappoint, reasons behind their actions are answered. The plot in Guardian Demon is almost like a crime mystery puzzle that must be solved before a deadline. Andromeda Taylor's detective skills come into play. She plays a big role with Michael assisting, the rest of the Guardians acting as backup, and Lillith directing the whole show. Andromeda's own powers are rather unique, and boy to they come in handy! That part of the book is excellent and well-woven in with the romance. It truly lives up to expectations.

Everyone plays a key role in the end. And just so you all know? Even characters introduced in novellas play a role in the end, so read those novellas, otherwise you may not know the characters, their powers or why they are there!

I couldn't think of how Brook would end this series, but the end to the romance in Guardian Demon is beautiful and just about perfect, and the end to the overall storyarc is excellent! I'm going to miss this complex and sexy paranormal romance series. It has been such an enormous pleasure gobbling up all the books. Now I look forward to rereading it again slowly and enjoying it all over again.