Mini: Under Her Uniform by Victoria Janssen 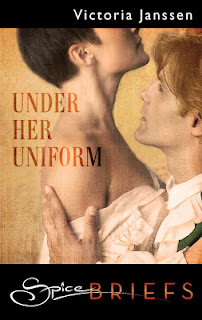 I think this novella can be read on its own and can serve as a small sample of Janssen's historical/erotic world. However, in my opinion this Spice Brief works best as a companion to The Moonlight Mistress. If you read this novella, you will want to read that book to know more about the characters, and vice versa. Read both and you'll be satisfied. Grade B-