Review: The Proposal by Mary Balogh 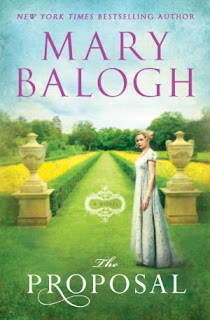 I am, unquestionably, a Mary Balogh fan. It should then be no surprise that as soon as The Proposal, the first book in her new historical romance series The Survivors' Club, was announced my excitement was great, and this book read as soon as it released.

The heroine in The Proposal is an old friend. If you've read A Summer to Remember, one of my very favorite novels by Mary Balogh, you will probably remember Gwen, Lady Muir. In that novel she was described as a beautiful widow with a limp who nevertheless seemed happy with her circumstances. I always wondered if she would find a happy ever after of her own.

In The Proposal, Balogh pairs our Lady Muir with a hero of the Napoleonic Wars. They both bear psychological scars, Hugo as a result of his actions during the war and Gwen as a result of long held guilt due to dark events that occurred during her marriage to the late Lord Muir. Neither really likes the other when they first meet as they are very different people. He is morose, stern, and holds a deep dislike of the aristocracy. She is personable and sociable. He comes from a family of businessmen and she comes from a well-known aristocratic family. On the surface they have nothing in common.

That doesn't stop Hugo and Gwen from being passionately attracted to each other or from acting on that passion. As two rational adults who think with their heads first, both agree that a relationship is not a possibility or even a consideration. The conflict, as superficially presented and argued extensively by Balogh's characters in this romance, becomes one that is seemingly about "a matter of class." However, there's always more to a Balogh novel, and as these characters are revealed in their true light through interactions and conversations, it is then understood that it is ultimately a matter of the heart.

Hugo gained his title through his heroic efforts in the war. However in his heart, he is a farmer and businessman and resents the aristocracy that made it tough for him to work his way up through the ranks in the military. Hugo is a strong man, a blunt, heroic, humble and capable man, yet he's also insecure when among the aristocracy except when in the company of fellow members of the Survivors' Club. He's convinced that he needs a wife of his own class to be happy, but finds himself passionately and physically attracted to Gwendoline. This is not necessarily a problem for him until he slowly becomes impossibly emotionally attached.

At first Gwendoline's attraction for Hugo is also physical, even as she doesn't necessarily understand her passion for such a man. However there's an affinity of spirit between Gwen and this blunt man that slowly and surely gains ground. She falls in love. But will love be enough for Gwen this time around? Can they put aside their differences and doubts?

In The Proposal there are no outside villains that become part of the conflict. The conflict that takes place is entirely between the two protagonists. As such this novel is character driven and entirely focused on the main characters, relying on dialogue and internal musings, doubts and personal realizations to move the romance along. There is physical passion, but there's also a subtle kind of passion that can be found in the characters' personal actions. This is a subtle romance.

It is because this is such a character driven novel that I found it to be uneven in sections. The emotions from one character or another are not always well-conveyed to the reader, and that surprised me. There's also a lack of flow and fine detail in some sections of this novel that were unexpected. This is Ms. Balogh and my expectations are always high. Regardless, I was able to lose myself in the story until the end.

The Proposal did not turn out to be my favorite story by this favorite writer. It is still a historical romance that I recommend if you like character driven novels with a subtle touch. I am most certainly looking forward to reading the upcoming stories about the members of the Survivors' Club. In this first novel, Balogh piqued my interest with her description of those characters and I can't wait for their happy ever afters.