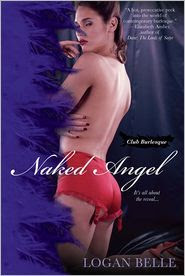 There's the main couple Mallory and Alec, whose erotic romps and romantic ups and downs began on that first book and end with the trilogy. After going through their romantic woes in Fallen Angel, in this installment Mallory is trying to get their new burlesque club The Painted Lady off to a good start, while Alec decides it is time to ask her to tie the knot. Mallory is fine with the idea until Alec suggests that maybe Mallory should hang up her feather boa and pasties and stop dancing. Wha...???!! Is that boy out of his mind? Mallory loves to shake her booty, and didn't she give up law school for burlesque in the first place? What is he thinking?!

THEN Logan introduces Nadia, a failed ballerina who decides to use her dancing background to make a new life for herself by dancing burlesque. Unfortunately she meets Max, the owner of a small ballet company who thinks Nadia can do better than make a living as a burlesque dancer. They lust after each other and fall for each other, and although he can't keep his hands off of her still resents her job and makes an idiot out of himself. Ohhh the drama!

Mallory, Alec and Violet Offender are likable and memorable, although I would say that they are defined as characters only to a certain degree. Unfortunately there's just not enough depth there to make a real emotional connection with the some of the characters that play a central role in this installment. I'm referring to Nadia and Max. I found Max to be self-centered, domineering, and demanding with less than valid concerns, and Nadia too easily and suddenly agreeable to his demands, as well as unbelievably understanding.