Continuing with my blogiversary week, today I'm highlighting another author whose works I have reviewed repeatedly at Impressions throughout the last three years. Nora Roberts has been my "go to" contemporary romance author for years. Throughout the years some of her romance books have become my comfort reads, my chicken soup for the soul. Roberts has had two releases within the last month, The Witness, a book I highly recommend, and of course the latest release in her straight contemporary romance series: 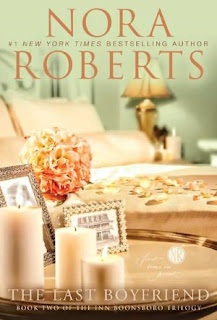 The Last Boyfriend is the second book in Nora Roberts' Inn BoonsBoro contemporary romance series. Avery McTavish, the owner of the popular pizzeria Vestra, caught my attention in the first book of the series and I've been looking forward to reading her romance with the manager and organizational genius in the Montgomery family, Owen.

What did I find in this novel by a favorite romance writer? In this book, Roberts most definitely uses a true form of the "friends to lovers" trope. Owen and Avery grew up together and have known each other since they were children. Avery even chose Owen as her first boyfriend when she was five years old, but since then they have been the best of friends. However, the relationship between them changes after they exchange a passionate kiss at the inn.

In The Last Boyfriend, and unlike what I found in the first book, there is more of a focus on the romance between Owen and Avery. They spend more time together on the page getting to know each other as a couple figuring out their new feelings and if or how they should go forward with a new relationship. As characters they are both extremely likable. Owen is a dependable, sexy sweetheart with a heart of gold, and Avery is a strong and vulnerable firecracker. She's one of Nora Roberts' redhead characters.

Owen and Avery enter into an affair early in the story, and there are passionate moments between these two people during that time, however, after those initial moments sexual tension is lacking. Additionally, their friendship and knowledge of each other's foibles and strengths allows them to work out their differences easily, so that even when few conflicts arise between Owen and Avery they seem minimal.

Although Roberts makes more time for this couple, there is a definite family atmosphere to this story. Everyone is not only involved in what's going on between Owen and Avery, but Roberts also layers additional individual story lines to the mix. It's almost as if The Last Boyfriend is one romance with Avery and Owen at its center, but with a bigger romance being told: the one between the town of Boonsboro and the whole Montgomery clan.

Roberts knows how to convey that family atmosphere on the page, and there are some wonderful moments here between the Montgomery brothers, between Avery, Hope and Clare, and between Justine (mother Montgomery) and her boys. There's one particular scene between Justine and Owen that had me in stitches... poor Owen!

It is also true that Roberts is great when it comes to research and in these books it is particularly obvious that she knows her stuff. There's the design, construction, and decoration of the inn, and now there are also other structures being restored through Boonsboro, so there are details, details, details. Beautiful details, but again, at times way too many of them and everything just works out... perfectly. And then there's the friendly ghost at the inn who by now has made her wishes known and whose backstory will predictably tie in with Hope and Ryder's romance.

I found The Last Boyfriend to be  an entertaining, sweet, contemporary romance with minimal conflicts and predictable situations. It has likable characters and that wonderful family atmosphere I've come to expect from Ms. Roberts. So yes, although this story falls on the average side of the spectrum for me, there's some real tension between hot stuff Ryder and Hope in this book and I will definitely be reading the last book of the trilogy, The Perfect Hope.