Review: The Witness by Nora Roberts 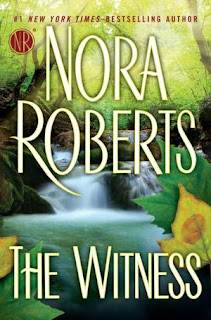 Daughter of a controlling mother, Elizabeth finally lets loose one night, drinking at a nightclub and allowing a strange man's seductive Russian accent lure her to a house on Lake Shore Drive. The events that followed changed her life forever.

Twelve years later, the woman known as Abigail Lowery lives on the outskirts of a small town in the Ozarks. A freelance programmer, she designs sophisticated security systems--and supplements her own security with a fierce dog and an assortment of firearms. She keeps to herself, saying little, revealing nothing. But Abigail's reserve only intrigues police chief Brooks Gleason. Her logical mind, her secretive nature, and her unromantic viewpoints leave him fascinated but frustrated. He suspects that Abigail needs protection from something--and that her elaborate defenses hide a story that must be revealed.

The Witness by Nora Roberts is her 200th novel. That's a great achievement, however, the best aspect of this celebration is that Ms. Roberts has done it with style by coming up with a winner!

The Witness is a stand alone romance suspense novel with all the ingredients that make this genre work. Ms. Roberts front loads the story with the tense and suspenseful story of a teenage Elizabeth Fitch whose one moment of rebellion against her cold and controlling mother ends in blood and tragedy. At age sixteen, witnessing two murders committed by the Russian Mafia and the events that follow change her life forever. This first section of the story entitled Elizabeth is gripping, fast paced, and action packed. I was sitting at the edge of my sit, holding my breath, wondering what and how, events were going to unfold.

Twelve years later in a small tourist town in the Osarks, the newest resident loner and local curiosity Abigail Lowery meets the town's police chief Brooks Gleason. At this point the story shifts into more of a contemporary romance, but in the background it maintains that thrum of suspense from the first section of the book. The reader doesn't know what is going to happen or if that part of Abigail/Elizabeth's life is going to come roaring back into her life at any minute. So while the romance builds, the tension oozing from Abigail's character, her paranoia and fear, all serve to keep the reader on edge.

The romance between Brooks and Abigail is wonderful. Abigail is socially inadequate, with the awkward personality of someone who is brilliant and logical but concrete in her way of thinking. By choice and necessity, she has maintained herself isolated and is easily confused by everyday interactions and emotions. Brooks on the other hand is a charmer who comes from a close-knit family and thankfully has magnificent social skills. He's a good cop with excellent insight and judgment, and an even better man who is not only understanding and protective, but loves unconditionally and is able to think outside of the box. These two balance each other out perfectly.

Brooks falls for Abigail like a ton of bricks and doesn't give up on her for one minute. I love the way he romances Abigail -- the way Brooks confuses and annoys her with the kind of logic she just doesn't understand, and is relentless until she opens up slowly to the possibility that she too can have love, specifically this man's, in her life.

The Witness is a long novel divided into four sections, yet it doesn't "feel" like a long read. One of the aspects of the novel that helps along is the fact that the suspense and the romance are well woven together. There's edge at the beginning, romance with that underlying thrum of suspense plus a few side plots with action throughout the middle to keep the reader on edge, and a satisfying and rather surprising ending to all of it.

Abigail designs sophisticated security systems and, as always, Ms. Roberts has done excellent research for this novel on that front, but there are no long sections where that research is overtly exposed, instead it is woven tightly with the plot. The other pleasing aspect of the novel is that although Ms. Roberts makes Brooks' family come alive to the reader, they do not take the focus away from the main characters or the suspense plot. In this case, just as the rest of the characters in the town, they serve as a perfect foil to the main characters.

The Witness is what I've come to expect from a Nora Roberts novel. There's a reason Nora Roberts has become my "go to" contemporary author throughout the years. If you want to know why she's such a success read The Witness, it is an excellent example of her best efforts.