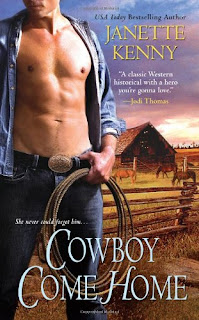 Trey March never wanted to see Daisy Barton again. But there she is, in over her pretty little head running the JDB Ranch—and standing between him and the small fortune he's owed. Now if he wants to get his due, he'll have to save the ranch first. . .working side-by-side with the only woman he's ever loved.


Without her overprotective father to guide her, Daisy's trying to stand on her own at last. But a sinister foreman with a grudge seems determined to cut her down at every turn. And Trey, the one man she can count on, is the same man she could never trust herself to resist. . .not even now, when her heart—and her life—are at stake.

Cowboy Come Home by Janette Kenny is the third and last book in the western historical romance Lost Sons trilogy.

After months recuperating from being roped, dragged through the dessert and left for dead, Trey March returns to the JDB Ranch to collect his horses and the money Barton owes him. The last person he wants or expects to see is Daisy Barton, after all she's the reason he almost lost his life and besides she should be married to her rich rancher fiancé by now.

Circumstances have changed drastically in six months. Trey finds that Barton is dead and Daisy now owns a ranch that is systematically being run into the ground by the shady, murderous foreman who tried to kill him, and the drought is doing the rest. Daisy is floored when she sees Trey at her door! How dare he show up after running out on her six months ago? Daisy is way over her head, working with a foreman she doesn't trust and in a situation that turns more dire by the day. She promises Trey that if he stays two months and runs the ranch, she'll fire the foreman and pay the debt owed him so he can go. He reluctantly agrees, and that's when things really take a turn for the worst.

Trey and Daisy have a history of passion and for Daisy one of love for Trey. So, as they fight to save the ranch Trey and Daisy also fight their own personal battle.  They are so different. He is just a ranch hand and she the coddled daughter of a rich cattle baron. Their passion brought them together before when the two agreed to a one time only sexual encounter, and ended up having a passionate illicit affair that lasted months. Still, Trey figures there's no future for them, even after Baron died he doesn't think a cash poor, affection starved orphan like himself is good enough for Daisy. As they begin sharing a home at the Barton's Circle 46 Ranch, their passionate affair is renewed, but Daisy wants more from Trey than just sex, she wants love. Trey is willing to give her marriage, but won't lie or say he'll give her something he doesn't even understand.

If this was the whole story, then I would say yes... this is an action filled western romance where the main conflict between the protagonists is initially based on misunderstandings, but one that eventually works itself out with the benefit of passion and slow building love and understanding between Daisy and Trey. I enjoyed this part of the story. There is sexual tension and passion between Daisy and Trey, plus lots of western style action to keep me entertained. However there's more, and that more is what really didn't work so well for me.

As I said above Cowboy Come Home is the last book of a trilogy. I didn't know that fact when I picked up this book as it's not mentioned on the cover, or anywhere else. So it was a surprise to me when about half way through the book, the story shifted, and the plot changed direction. Kenny continues to develop the romance until the end, but the external conflicts become totally different. Daisy and Trey's past histories take central stage. Trey is an orphan and Daisy suffers from partial amnesia from a fall she suffered as a child. Things begin to unravel for both of them and the last third of the book is taken up with Trey's adopted "brothers" from the orphanage and their wives (the first two books) coming into the picture, and some highly coincidental and convenient resolutions to solve long-time personal mysteries.

I'm a bit torn about Cowboy Come Home. Having read this book on its own, for me, the shift in direction made a difference to my overall enjoyment of the story. However to be fair, I would say that I think reading those first two books in the trilogy is essential to making that emotional connection to the characters that eventually make their way into this story. And for fans, there is that happy ever after to the Lost Sons trilogy.

Series:
A Cowboy Christmas
In a Cowboy's Arms
Cowboy Come Home
Posted by Hilcia at 1:18 PM