Review: The Book of Want by Daniel A. Olivas 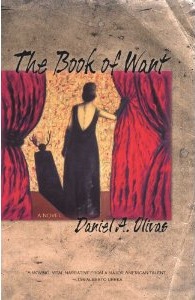 When Moses descended Mount Sinai carrying the Ten Commandments, he never could have foreseen how one family in Los Angeles in the early twenty-first century would struggle to live by them

Conchita, a voluptuous, headstrong single woman of a certain age, sees nothing wrong with enjoying the company of handsome—and usually much younger—men . . . that is, until she encounters a widower with unusual gifts and begins to think about what she really wants out of life.

Julieta, Conchita's younger sister, walks a more traditional path, but she and her husband each harbor secrets that could change their marriage and their lives forever. Their twin sons, both in college, struggle to find fulfillment. Mateo refuses to let anyone stand in the way of his happiness, while Rolando grapples with his sexuality and the family's expectations. And from time to time, Belén, the family's late matriarch, pays a visit to advise, scold, or cajole her hapless descendants.

Ahh... The Book of Want! This is Daniel A. Olivas' first and I believe a wonderful debut novel. Using both social and magical realism, Mr. Olivas relates the story of a Mexican-American family covering three generations.

Olivas sets the story in Los Angeles with some of the back story taking place in Mexico. The novel begins with a prologue set in Mexico where he introduces Belén the matriarch of the family and her young daughter Conchita, the rest is divided into ten related, self-contained chapters, and ends with an epilogue.

The story focuses on two sisters, Conchita and Julieta. Conchita is a sixty-two year old woman, great looking and single. She loves being single, adores younger men and has had plenty of them in her life without a care for what anyone thinks of her. Although lately Conchita's age has become a problem:


"But now, when it came to her dating life, with each passing year, men's interest in Conchita has dwindled. Though still possessing a voluptuous figure, creamy-brown skin, and large, inviting eyes, few men under the age of fifty even acknowledged her presence. And Conchita had no desire for men her own age because they looked ready for the trash heap. It was galling. If she were a famous male actor, she could have her pick of younger partners!"

Slowly, however, Conchita's interest for her widower neighbor Mr. Rojo helps her reassess her life. Mr. Rojo certainly holds her attention with his mysterious ways and eventually shows Conchita that the seemingly impossible can happen. One of the most amusing chapters in the book, "How to Date a Flying Mexican," is related from Conchita's perspective -- hilarious and so well done!

Julieta is the traditional sister. She has been married to Manuel for years and together they have college-aged twins Rolando and Mateo. In this family everyone has secrets! Manuel's suspicious activities and big secret could end the marriage, and Julieta is keeping a secret of her own. Rolando in the meantime struggles to come to terms with his homosexuality, just as self-centered Mateo who thinks he can have everything he wants learns a few lessons. This family is firmly rooted in the present with daily, contemporary issues and struggles that are surprisingly well addressed in this short, ambitious book.

But hey, I don't want to leave out Belén. Belén is Conchita and Julieta's mother and has been dead for a while, but remember this is magical realism we're talking about so that's of no consequence here. She visits her descendants to advice and harass them about their decisions and eventually Olivas takes us back to Mexico for her story, providing the readers with this family's background. Interestingly enough, although Belen's story is fascinating and she's an integral part of the generational and cultural family tapestry created by Olivas, I found that going back in time after relating the first five chapters in the present interrupted the story's flow.

It's also interesting that although I love the story as a whole, I still think of the different chapters singularly. Chapter 10, Want: A Symphony is brilliantly done in its simplicity, yet there's a small section of it that didn't quite work for me. This is where Olivas ties all the story lines with small accounts or episodes by using text messages, interviews, or just dialogue between the characters. What didn't work so well for me? Interviewing the characters pulled me out of the story and dispelled some of the magic that Olivas so beautifully creates throughout most of the book.

There's a correlation between The Book of Want and the Ten Commandments, however not at all in a religious way. Happiness, love, acceptance, sorrow, friendship, and of course want are all subjects covered in this 121 page book by Mr. Olivas. For the most part I thoroughly enjoyed Daniel A. Olivas' approach to this family's story. I was particularly taken with the way Mr. Olivas focuses his use of magical realism closely to the Mexican-American culture while social realism encompasses the story as a whole, and through it all the humor and wit that abounds from beginning to end makes The Book of Want a delightful read.

About the Author: Daniel is the author of six books including his first full-length novel, The Book of Want, which was published by the University of Arizona Press in March 2011. He is also editor of the landmark anthology, Latinos in Lotusland (Bilingual Press, 2008), which brings together 60 years of Los Angeles fiction by Latino writers. Daniel's writing has been widely anthologized (including in two Norton anthologies). He blogs each Monday on La Bloga, the blog dedicated to Chicano and Latino literature.

Daniel, the grandson of Mexican immigrants, grew up near the Pico-Union and Koreatown neighborhoods of Los Angeles. He now makes his home in the San Fernando Valley with his wife and son. Daniel received his degree in English literature from Stanford University and law degree from UCLA. He is a supervising deputy attorney general with the California Department of Justice in the Public Rights Division.

Visit Daniel A. Olivas here.
Posted by Hilcia at 7:54 PM