What Am I Reading? The Hunter by Theresa Meyers, Leviathan Wakes by James S.A. Corey, and...

Hey y'all, I disappeared this week! It has been all about work, work, and no play this last week. And I mean work. I haven't even had time to read, and that should really say it all because that's rare unless I'm suffering from reader's block.

I've been halfway through Sweetwood Bride by Pamela Morsi for over a week now, and still haven't finished it! That's a shame because although the story is not a favorite so far, it is still Morsi worthy. :)

I'm also in the process of reading a gorgeous science fiction opera book that has been in my TBR since June when it first released! I'm highly enjoying it and can't believe I waited so long to start on it.  Leviathan Wakes (The Expanse) by James S.A. Corey is a mammoth 592 page book with unforgettable characters, incredible action (so far), and great science fiction details. This is science fiction, though... not sci-fi  romance. It has been a while since I read straight sci-fi and forgot how wonderful it can just... be. I promised myself this book would be finished before the end of the year, and it will! It's a personal challenge, lol.

I have been carrying another book around with me this whole week though... and  I've read a total of five pages! The thing is that this book really caught my eye and I can't wait to get into the meat of it... so, I. am. so. frustrated! You ask... "why aren't you reading right now instead of blogging?" Well, I only have a few minutes break and want the time to enjoy the book... I don't want to read it two pages at a time. I hate doing that.

Which book is it? Well, it's one of those books that arrived on my doorstep late November. Here it is:

The Hunter by Theresa Meyers 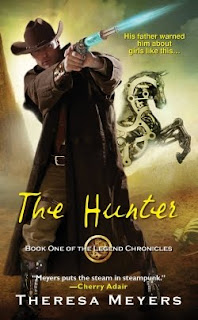 Colt Jackson has gotten his name on many a wanted poster with success in the family business: hunting supernaturals across the frontier. Lately, though, there's a sulfur stink in the wind and the Darkin population is exploding. A rift in the worlds is appearing. To close it, Colt will have to do the unthinkable and work with a demon to pass arcane boundaries no human alone can cross.

Except when he summons his demon, he doesn't get some horned monstrosity: he gets a curvy redheaded succubus named Lilly, who's willing to make a bargain to become human again. He also gets Lilly's secret expertise on the machinations on the dark side of the rift. And her charm and cleverness help to get them out of what his silver-loaded pistol and mechanical horse can't. Of course, when all hell breaks loose, he might have to sacrifice his soul. But what's adventure without a little risk?


Why this book? Well, how could I resist? It's a combination western, steampunk, paranormal romance! Can you imagine me passing up a cowboy hero in a steampunkish western set up? Hmm... nope! I love the cover too! I love that clockwork horse in the background. The Hunter is Book One of The Legend Chronicles, so if I like this book where foes are vampires and the heroine is a succubus, then there's a new series in the offing for me!

ETA: How could I forget this note... there are three brothers, this book is about Colt, but the other two brothers' names are: Winchester and Remington -- they all share names with famous brands of guns or rifles. I love that detail. ;P

I hope to catch up with my reading, as well as post a few reviews! For now... thank goodness it's Friday!
Posted by Hilcia at 1:46 PM