Retro-Review: A Duke of Her Own by Eloisa James

This is one of those retro-reviews I promised to post once in a while, this is the perfect time for me! Eloisa James is an author whose historical romances I enjoy -- some books and series more than others. I waited a long time for Villiers story and this was my review of the book when it was released. 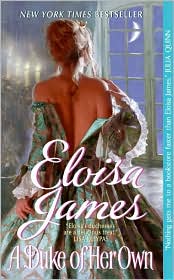 A Duke of Her Own is the last installment in Eloisa James' Desperate Duchesses historical romance series. This is the story that we have all been waiting for -- we finally find out what happens to Leopold Dautry, the Duke of Villiers. He is one of the most interesting characters of this series and one I fell in love with from the first.

In Desperate Duchesses, Villiers was portrayed an arrogant Duke with a dismissive and cynical outlook for the ton I couldn't help but admire. He was a man of contradictions who seemed to care much for his outward appearance; a true rake who didn't think twice about having illegitimate children with his mistresses, and an egotistical chess player who thought he was the best and didn't have a problem saying so. Our Villiers didn't have the best of profiles, but he seemed to have the sex appeal and fire to attract the Georgian ladies like months to a flame. Yet, he disdained those around him. The more he was admired, the more cynical he became. How could I not be intrigued?

As the series progresses, our not-so-pretty and not-so-nice hero is jilted by two different fiancés. He thinks love is for fools and it's not something he wants in his life. By this point I just think Leopold deserves some love, weather he wants it or not.

Our story in A Duke of Her Own begins right after Villiers makes the decision to raise his six illegitimate children (yes, six!) under the Ducal roof. In order to achieve this, he needs a wife quickly -- one willing to take on his illegitimate children and strong enough to face down the ton. Only a Duke's daughter will do for him and only two are eligible.

Eleanor, the Duke of Montague's daughter, is both beautiful and intelligent. She is also a woman whose heart was broken at a young age and who thinks she's still in love with her old beau, a man who is now married. She once said she would only marry a Duke and now one is available -- her family is putting on the pressure.

After a first meeting full of sharp, witty dialogue and some excellent sexual tension, Villiers decides that Eleanor will do. Especially since he's under the impression she is his only hope. Leopold wants to make her his fiancé immediately, but she declines and lets him know that there is one other woman who qualifies. Eleanor convinces Leopold, he must meet this woman before making a final decision in regards to the betrothal.

Lisette, daughter to the Duke of Gilner, resides in the country and never comes to town. It is rumored that she's mad. A house party is quickly planned and all our characters retire to the Duke of Gilner's residence. Lisette is a beautiful woman who seems to have a disregard for the manners and restrictions of the ton. She works closely with an orphanage, loves children and seems to possess a vivid imagination. Villiers is immediately taken with her.

There is also an ongoing storyline that pertains to a search for two of Villiers' illegitimate children. Lisette's charity work with the local orphanage makes this a convenient trip for our hero. The children play an important part in this story, with Tobias, his eldest son, as a somewhat key player. Tobias and Eleanor's sister turned out to be my favorite secondary characters.

Once they are all gathered in the country, the story gets interesting. Sparks fly between Leopold and Eleanor... the passion between them is sizzling and I enjoyed every one of their scenes together. Eleanor is sexy and smart but her 'blind love' for that old flame gets old after a while. As a couple, these two are a pair of flawed characters whose wit and passion outweigh their insight and judgment.

I had fun with this book. Villiers was not the keenest of men when it came to understanding women or children, and he knew it. He admitted it to all and sundry and still went ahead and made one mistake after another. As his young son Tobias told him, he was "such an ass!"  I still liked him even though I thought his future Duchess forgave him too quickly. She should have made him beg for at least a year!

The edginess I found in Villiers' character at the beginning of the series was mostly gone by the end of the series. He was a reflection of the man we first met in Desperate Duchesses. Ms. James developed his character throughout this long series and his growth and change took place slowly throughout. In the end, I found myself liking Villiers, but not quite loving his character as much as I did in the beginning. I missed that edge.

All in all this was a good Georgian romp, with a full set of great characters and quite a few enjoyable moments for me. A nice ending to a long series, I give this one a B.

Complete series:
Desperate Duchesses
An Affair Before Christmas
Duchess by Night
When the Duke Returns
This Duchess of Mine
A Duke of Her Own

Originally posted at Musings of a Bibliophile September 5, 2009
Posted by Hilcia at 7:28 PM