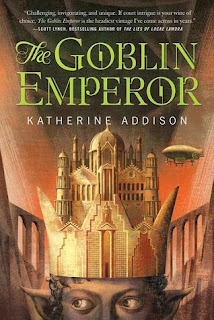 "Better to build new bridges, he thought, than to pine after what's been washed away. He dipped his pen again and wrote with printed legibility across the bottom of the page, Edrehasiver VII Drazhar. Edrehasivar VI had had a long, peaceful, and prosperous reign some five hundred years ago.
Let it be an omen, Maia though […]" -- Page 38

The court intrigue in The Goblin Emperor is complex and detailed, but I was really captivated by the main character Maia. Kate Addison's goblin emperor, His Serenity Edrehasivar VII Drazhar, or Maia, is an honorable young man grossly unprepared for a position he was not educated to fulfill. Stuck in a position he never wanted, Maia is lonely and looking for a friend in a place where there are no friends to be found. Instead there are those who may or may not be loyal to the emperor, or who do not or cannot consider Maia as an individual.


"If he could simply have lain down and died of grief, he would have. His mother had been the world to him, and although she had done her best to prepare him, he had been too young to fully understand what death meant---until she was gone, and the great, raw, gaping hole in his heart could not be filled or patched or mended. He looked for her everywhere, even after he had been shown her body---looked and looked and she could not be found." Page 50

The fourth wife of Emperor Verechibel IV of the Elfs, the Empress Chenelo Drazharan, a Goblin princess and Maia's mother, was banished or relegated from the Utheileneise Court by the Emperor when the legal consummation of their marriage resulted in her pregnancy. The Empress Chenelo died when Maia was eight years old, leaving the fourth and youngest son of the emperor to be raised in solitude and neglect by the resentful and abusive Cousin Setheris.

Immediately after his father and three brothers die together on an airship crash, the unprepared and unschooled eighteen year old Maia becomes Emperor of Ethuveraz, ruler of the Elflands. His insecurities show when he arrives at court where he finds intrigue, enemies, and contempt from some, while others just curry favor. The entire novel takes place in Maia's world while he navigates the dangerous and tricky pathways of court politics, betrayals, assassination attempts, an arranged marriage, and in the process learns who he is and the type of ruler he wants to become.

Following the complex pathways of the court intrigue with Maia as he puzzles it all out, slowly growing from an indecisive, self-conscious youth gaining strength and determination to become a peaceful, compassionate ruler makes for some fantastic reading. But, The Goblin Emperor's ultimate success comes from Addison's characterization of Maia as the lonely, brokenhearted young man who needs a friend, the optimistic, hopeful Maia whose understanding of other individuals comes from the heart, his own experiences, and inner strength.

And here is where those all important secondary characters come into play. Addison surrounds her main character with villains, yes, but also with other secondary characters who throughout the novel showcase Maia's character growth. Most of the relationships he forges with them are not entirely positive, and some are downright hostile in the beginning or in their entirety, yet some of these secondary characters propel Maia forward, they make him analyze his situation and himself, discover his own beliefs and grow as a person and as an emperor. For example, Maia's complex relationship with Cousin Sethersis is key in his growth as emperor, yet their personal relationship never goes beyond hostility and heartbreak. Other key secondary characters are Maia's personal secretary Csevet Aisava, bodyguards Beshelar and Cala, as well as his two sisters, his young nephew and heir Idra, his goblin grandfather, and finally his fierce fiancée Ceredin.


"His memory of his father, the only time he had ever seen him, was of the Emperor Varenechibel IV, tall and distant, with glacial eyes and a face as white and cold as marble. He remembered the white robes stiff with embroidery, the moonstones on his father's hands, braided into his hair, hanging from his ears. He remembered the black bands, the only token of mourning the emperor had deigned to wear for his fourth wife, like smears of ink across the whiteness of his person. He remembered his father's bitter mouth, and his smooth silken voice: The damned whelp looks just like his mother. -- Page 21"

Addison adds interest and gives depth to the story by incorporating pertinent social issues to her fantasy without overwhelming the story with them. For example, she weaves in heteronormative bias toward homosexual relationships, as well as strong female characters who carefully navigate gender bias in a restrictive social and cultural environment. Additionally, class and religious differences are incorporated. However, it is racism that is often emphasized through Maia's narrative as Addison utilizes the differences in coloring between elves and goblins and the elves' reactions to goblins, beginning with grey skinned Maia and his mother, and extending to other characters as they appear throughout the story.

Writing style is also quite important in this fantasy. The story is narrated from Maia's first person point of view, however the most unique aspect of the story is that all of Addison's characters use the royal "we" to communicate, with the antiquated "thou" thrown in for good measure and "I" used only to make a very personal statement and to emphasizes some powerful moments in this novel. This style works quite well and the story flows without any of the clunkiness you might expect. If anything interrupts the flow at times, it is the way in which the elven names are used. There is a long cast of secondary and peripheral characters with names and extended family titles that after a while become confusing. There is a "List of Persons, Places, Things and Gods" at the back of the book, but again, referring to it can interrupt that all important reading flow.

The Goblin Emperor by Katherine Anderson (aka Sarah Monette) is a standalone fantasy with light magics, steampunk elements and a strong focus on court intrigue and characterization. This fantasy stands well on its own, with its story of vulnerable, sympathetic Maia and his idealistic views of a peaceful and prosperous future. I absolutely love that about this book! Having said that, I can see fans clamoring for more Maia, wanting to know more. However, for me, this beautiful, refreshing fantasy with its captivating main character is already a favorite. Highly recommended.