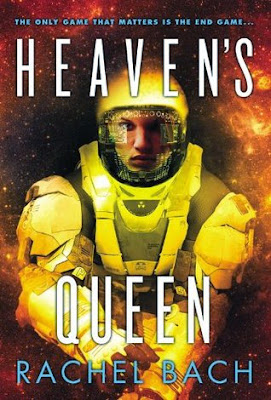 In Heaven's Queen, the last book of Rachel Bach's Paradox trilogy, the romance between Devi and Rupert is fully developed while the action continues and Bach ties up the loose ends.

Heaven's Queen begins exactly where Honor's Knight ends, just as after Devi and Rupert finish off Ripper's xith'cal clan and jump into hyperspace, with Calsdwell and the surviving crew jumping to a different, unknown location. Unfortunately, they've lost a whole year during the jump and that everyone thinks Rupert and Devi, along with the phantom-killing-virus plaguing her, are dead. Devi and Rupert land on an a faraway agricultural moon, but don't have much time to relax or enjoy their anonymity before Devi's old friend and long-time Paradoxian lover Anthony shows up at their hiding place making demands on her emotions and ordering her to go home. Devi's not about to put up with that, so she furiously and rather callously dismisses Anthony. His discovery, however, means she and Rupert need to run fast because the Eyes won't be far behind and who knows if Caldswell is around to honor their deal to save the daughters and not make a lab rat out of Devi?


"Smart or not, embarrassing or not, the truth was that I still had feelings for Rupert. In my defense, though, what was not to love? He was handsome, thoughtful, a fantastic fighter who respected my abilities, a good cook, and a great kisser. He was also a sly operative, something I deeply respected because I was anything but, and he was so, so loving."

This is where Bach further develops Devi and Rupert's romance by having them spend time alone. Devi analyses her feelings for Rupert which I found repetitive as she continues to go back and forth between love and distrust. But, the intimacy during this time serves to create a bond and they begin the process of opening up to each other. This is reinforced after the Eyes briefly catch up with them and after Rupert gets hurt, Devi comes clean with him, finally cementing a strong relationship. The two of them are basically in this "alone" state until about page 163 when they seek help and all hell breaks loose again.

Both Devi and Rupert go through big changes throughout this series. There is marked character growth for both, but neither loses what made them attractive in the first place, particularly Devi. She continues to be the cocky (I-can-do-anything-better-than-you, move-out-of-my-way) Paradoxian soldier who runs into battle and kills without hesitation, but has a code of honor and, most importantly, a conscience. She also continues to be a concrete thinker and poor at solving puzzles or mysteries, but I love that by taking the direct approach, somehow, Devi gets her answers. After all, she is the hero of this piece. Rupert has to make some tough decisions, and although when necessary he is still the cold killer, we see more of the vulnerable man in this last installment. I believe that those who love a healthy dose of romance with action packed science fiction will definitely enjoy this turn of events.


"I obeyed two authorities: my officers and my king. I was a loyal subject and a good soldier, but I was no one's slave, and like hell was I going to let this virus make me one."

Since this is the end of the series, there is much going on with the overall storyarc. Like saving the universe by solving the big mystery, figuring out what to do with the deadly virus infecting Devi, saving the daughters, dealing with crazy Maat, the Eyes, and all those aliens -- the phantoms, lelgls, and xith'cal. Bach ties these threads together with surprising alacrity. Also surprising are the actions of key secondary characters, which provide this last installment with a bit of unexpected excitement and intrigue. The pacing in this installment, however, is not as fast as in the first two, with the real action coming in toward the last third of the book.

Heaven's Queen is a solid ending to the Paradox trilogy. There is a definite focus on the romance, which goes on the "pro" column for me personally, specifically because I don't feel that this aspect of the story takes away from Bach's execution of the overall storyarc. The slower pacing toward the beginning served as a build-up to the action, and the ending was Devi-fabulous. What is sorely missing from this series? Paradox, the planet for which this series is named. None of the action takes place there and I was left wanting a more solid view and understanding of the Paradoxian culture and its people. Having said that, this series as a whole is a thoroughly entertaining, delicious space adventure, with a great female as the hero or central character and an overall storyarc that begins light and fun but gains strength as the trilogy moves along. Recommended to both science fiction readers who enjoy fun action, adventure, monsters, aliens, and a little romance.