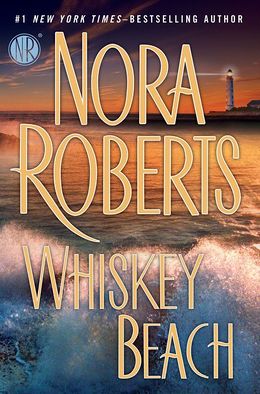 It's time for my review of Nora Roberts' yearly contemporary romance suspense release. This year it is Whiskey Beach, a novel set on the coast of Massachusetts near Boston. It has been a year since Eli Landon was accused of brutally murdering his wife Lindsay. While not enough proof was found to arrest him, Eli still lost his career as a successful defense attorney and most of his so-called friends due to a painful year of close scrutiny in the public media. His spirit and will to fight are severely worn down by both the media and the cop who investigated the murder and still hounds him, determined to pin the murder on Eli one way or another.

Eli moves to the Landon family home, Bluff House, in Whiskey Beach after his grandmother Hester suffers an almost fatal accident. There he meets Abra Walsh, his grandmother's housekeeper and the woman who saved her life. Hester entrusted Abra with Eli's welfare but Eli's beaten and hostile demeanor only serves to bring out the nurturing side of this woman who also understands what it is to be hounded and hurt by others. Eli begins to heal, and a romantic relationship with Abra blooms, but their time together is plagued by accidents, assaults, a burglary, and another murder and soon the cops are knocking at Eli's door again. Will he be able to survive another round with the police? Are the murders and incidents related to Lindsay's murder? If Eli didn't kill Lindsay, who did?

Last year I loved Nora Roberts' romantic suspense release, The Witness. Unfortunately, I can't say the same for Whiskey Beach because although there is romance and suspense ala Nora, neither turned out to be exceptional nor above average. Diving into this romance felt like wearing a comfortable pair of old socks, the feelings of warmth and comfort are there, but it is sorely lacking in passion and sexual tension. After they first meet, Eli is hostile and wants some space, but Abra pushes him to get him out of the depression that has been weighing him down -- and I mean she is relentless with the pushing, nurturing and manipulation. The result is that although these two people barely know each other, they quickly begin to act and speak to each other like an old married couple.

Obviously, I wasn't crazy about Abra. In my notes I wrote: I think Abra drank a couple of cases of wine by the time this book ended. I hope she was drinking good stuff! Not that I blame her, I mean the poor woman needed a bit of R&R after her daily schedule because what didn't or couldn't Abra do? She's a personal massage therapist, a yoga instructor, a jewelry maker, a waitress, a housekeeper, the perfect cook, a volunteer and holds jobs doing all of the above. (And I know there are other skills and jobs I missed) So realistically, when does Abra have time to do all that, and still find time to: take care of Eli, sleep, eat, shower, have energetic sex, play with the dog, and drink all that wine (without getting daily hangovers) too? As unbelievable as all that sounds, you have to admire the creation of a woman like Abra, yes? However, once Roberts makes Abra part of solving the mystery and catching the villain, she definitely falls into the perfectly perfect woman category. Unbelivable.

On the other hand, I enjoyed Roberts' portrayal of Eli as a man coming out of a long bout of depression but still consumed by guilt. He allows Abra to manipulate him into eating, exercising and even getting a dog and beginning a relationship with her, all because he has no strength left to fight. But the slow healing process and recovery are well-rendered by Roberts. I loved his relationship with his grandmother Hester and the rest of his family. I adored his interactions with his dog, Bambi! And, the blooming of a new Eli, not the defense lawyer, but a caring man who learns how to live again.

Roberts weaves in the suspense with the romance well. There are no awkward separations of the two at any point during the novel and the suspense plot is technically well crafted, although I would say that it lacks edge and is rather predictable. At least it was to me since I figured it out how it would turn out early on even as specific details eluded me. Of course, Roberts is all about the details and that is as obvious in Whiskey Beach as it is in her other novels. She effectively blends in local history along with research about bootlegging, pirates, and fictional murder without resorting to long sections of info dumping.

Whiskey Beach did not wow me, but it did not overly disappoint me either. Despite my problem with the often annoying, over-the-top perfect female protagonist, the way too comfortable romance, and the technically well-crafted but predictable suspense, overall this romance suspense turned out to be a pleasant, if average read.