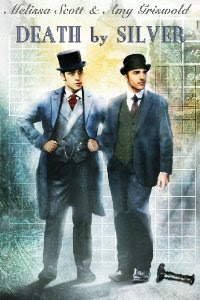 Death by Silver by Melissa Scott & Amy Griswold is a fantasy mystery with an unquestionable steampunk flavor that does not overwhelm the world-building, yet offers enough magic and subtle details to give this story set in a recognizable Victorian London, a very distinct atmosphere. There is quite a lot to enjoy in this well executed fantasy mystery with its delicious twists and turns, red herrings, murders by magic, personal struggles and a question of the heart.

The story begins when metaphysician Ned Mathey's newly established practice is hired by well-known banker Mr. Edgar Nevett to cleanse his family silver of ancient or modern curses. Ned hesitates as soon as he realizes that Mr. Nevett is Victor Nevett's father, the prefect who bullied him and others throughout his years in boarding school. Nevertheless, Ned accepts the commission and finds that the silver is clean of enchantment.

Unfortunately a few days later, Mr. Edgar Nevett is found in his study murdered by an enchanted silver candlestick. Soon thereafter, Victor Nevett himself offers to hire Ned to solve the murder. Ned accepts reluctantly, after all business is business and his name and reputation as a metaphysician must be cleared. With the aid of his assistant Ms. Frost, Ned and closest school friend and sometimes lover Private Detective Julian Lynes rush to solve a murder, a burglary, and the mystery of the enchanted silver candlestick. Ned and Julian face danger, old and new foes, struggle to come to terms with painful past experiences and with feelings they may or may not have for each other.

The absorbing mystery drives the plot in Death by Silver as Scott and Griswold keep clues and details coming at a fast pace with well-executed red herrings, twists and turns. The mystery is well integrated with the world-building and the relationship struggle taking place between the characters. Most importantly, none of the characters in Death by Silver, including the villain(s), fall into the black and white category. Instead, they all display strengths and human frailty. Scott and Griswold effectively explore gray areas and the humanity of their characters through Ned and Julian's perspectives.

The fantasy details are organically incorporated into the world-building throughout the story and make sense from the beginning. For example, details such as a recognizable London as the setting with true to time Victorian morals, behavior, and lifestyle, are subtly blended in with magic, enchantments, automata-building salesmen, alternate institutions, laws, some rather interesting flora, and religious beliefs.

However, the hearts of this story are our main characters and narrators Ned and Julian. The story is narrated from their alternating first point of view perspectives. As a result, Scott and Griswold give the reader an in-depth look into both characters that include personal history, intimate thoughts, fears, and feelings. They also give an excellent view of secondary characters and different perspectives of the unfolding plot. The shifts in point of view flow well as do the intermittent flashbacks employed to show the characters' pertinent past experiences with bullies at boarding school.

The extent of the bullying episodes is revealed slowly and blends in with the mystery, as Julian and Ned confront personal fears and consequences of those boarding school days while working closely with the man who bullied them. Also slowly integrated are our main characters' depth of feelings and insecurities as they circle each other and wonder where their relationship stands. This is not the main focus of the story, still, I love Ned and Julian's "friends and lovers to romance-in-the-making" conflict.

I loved everything about Death by Silver -- the world-building and excellent atmosphere, the characters and their personal struggles, the twisty well-paced plot and the delicious romantic relationship-building elements, all the way to the great ending. I just hope that Scott and Griswold are planning a series because these characters and world are begging for one! Highly enjoyed and recommended.

Visit Melissa Scott at Goodreads, and Amy Griswold at her LJ page or Goodreads.