Here are my impressions on a little gem I read while searching for this week's TBR Challenge read. I began skimming and couldn't stop reading until I finished it.

The Horsemaster's Daughter by Susan Wiggs. 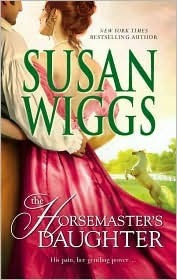 Southern plantation owner Hunter Calhoun gambles the success of his Virginia horse farm on an Irish stallion; unfortunately, the animal arrives crazed and unridable after the stormy sea crossing. Desperate, Hunter turns to Eliza Flyte, the horsemaster's daughter, who has inherited her father's gift for gentling horses. Her ability to heal wounded spirits with her compassion and wisdom is amazing, and when Hunter convinces her to leave her isolated island and return home with him, she soon applies that gift to the bitter man and his grieving, motherless children. But what future can a woman raised alone by her father with only the sea, animals, and a few books for companions have with a man who grew up as a rich, upper-class son of the South? It seems unlikely that Eliza could ever fit into Hunter's world and just as unlikely that he would give up his privileged life for her world. It just may take a miracle for these two mismatched lovers to find a way to live happily ever after.

The Horsemaster's Daughter by Susan Wiggs is the sequel to her highly enjoyable historical romance, The Charm School. In that novel, I loved the twist on "The Ugly Duckling" that Wiggs used to develop the romance. In The Horsemaster's Daughter, Wiggs combines two classics: The Tempest by Shakespeare is very much a part of the first part of the book when Hunter and Eliza first meet at Flyte island and Wiggs introduces the reader to the innocence and magic of Eliza's upbringing and personality which contrasts with Hunter's cynical and tortured soul.

Later on once Eliza is forced to leave the island and Hunter takes her to his dilapidated mansion in Virginia, Wiggs incorporates Bronte's Jane Eyre along with The Tempest into the rest of the romance as Eliza becomes "governess" to Hunter's motherless children. Wiggs further develops Hunter's dark side, and through Eliza's efforts at healing, the reader learns what haunts him and his family. Wiggs beautifully combines both tales into a pre-Civil War romance.

I loved Eliza's character. There's an innocence and a sense of wonder about her, but it is all mixed in  with insight, deep knowledge and compassion. Eliza's capacity to love is boundless, yet she is not easily trampled and doesn't allow herself to be used or abused. Eliza is a giver and does so without holding back, yet she tries to be realistic about her circumstances. Her understanding for gentling horses, Eliza's deep understanding of the children and her open, honest passion and giving love for Hunter all make her a winning heroine, but the way she deals with those Virginia belles? Well... that makes her a champ in my eyes!

Hunter on the other hand is a man who has allowed loss and guilt over what he sees as past mistakes to embitter his life. He has become a functioning alcoholic and when  not drunk, a workaholic. As a result his children and personal life are both severely neglected. Eliza's arrival changes everything for Hunter and his children. Hunter Calhoun is a good man and soon enough we know to whom his passion and heart belong, but he is stuck and has wallowed in an emotional swamp of denial for so long that admitting he's wrong, and confronting his weaknesses and mistakes, have almost become an impossibility. It's a tough road to a happy ending for Hunter.

There are secrets upon secrets to unravel within this romance. The dead haunt the living. Lacey's death and her secrets haunt Hunter and their children, and Henry Flyte left the world and Eliza without revealing secrets that come back to haunt and change her life forever. Wiggs' portrayal of Virginia's pre-Civil War society and the facts introduced about the Underground Railroad used by abolitionists give this romance more than just atmosphere, these facts give it depth. The characters in this novel stayed with me, Eliza and Hunter, Blue, Noah and Charles, and yes... Lacey Beaumont Calhoun and Henry Flyte. This time around there was no surprise on my part as to why I enjoyed Ms. Wigg's historical romance. This time I just sat back and enjoyed the great ride from beginning to end. Grade B+

Series:
The Charm School, Book #1
The Horsemaster's Daughter, #2
Posted by Hilcia at 1:26 PM