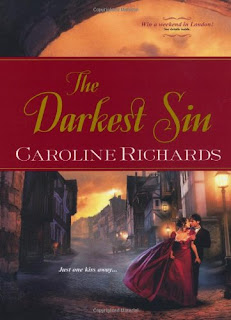 Lord James Rushford is the only man in London who can lead Rowena Woolcott to the villain who has been tormenting her family for years, and she will stop at nothing to enlist his help. Even if she must pretend to play a dangerously enticing role: his mistress.

Rushford has demons of his own—a dark past that haunts his memories. Yet the temptation that Rowena presents is more than he can resist.

Claiming to be lovers should not be so easy—or feel so achingly appealing. But as Rushford ushers Rowena through London's most elite clubs and sinister underworlds, truth and fantasy blur. And as the threat to Rowena grows near, the masquerade of passion begins to feel startlingly real. . .

Rowena Woolcott was kidnapped from her home, drugged and left for dead. She was rescued by a stranger as she was drowning, but as a result part of her memory is gone. However, Rowena knows that someone wants to hurt her family and she can't return home. For a year she has been hiding as a governess in London and accumulating money to find help. After reading newspaper accounts about the Cruikshank murders, she decides to hire Lord James Rushford to help her find the culprits so she can eliminate the threat to her family. What she doesn't expect when finally meeting Rushford, is his reluctance to help her or the almost instant and familiar passion she feels for him.

Lord James Rushford has personal baggage and leads a guilt-ridden life. He's also known throughout London as a kind of sleuth after solving the Cruikshank' murders where Sir William Hutcheon was found guilty and hanged. None of these events make him a well-liked member of the aristocracy, but they do make him the perfect man to help Rowena Woolcott solve her problem. Rushford, however, is more than reluctant when he refuses to help her, and it's perfectly obvious that there's something more to his reaction to Rowena from the beginning.

The Darkest Sin by Caroline Richards is a bit Gothic(ky) with great atmosphere and good characters. Rowena Woolcott as the heroine is likable, although she displays lack of judgment more than once due to her stubborn belief that she can handle anything on her own, even after she goes to Rushford for help. Rushford as the hero is mysterious, yummy and likable, if a bit too riddled with guilt and obsessed with his dead ex-mistress. The sexual encounters between Rowena and Rushford are sensual and passionate, beginning with tension and ending with some excellent desperate sexual encounters between these two.

The plot is slightly convoluted with a romance that focuses on the couple, a suspense with action, and a villain that is a bit mad and over the top. The reader is left in the dark as to what's behind the villain's real motivations, with the reveal possibly coming out in an already planned sequel. I recommend this historical romance for those who enjoy a bit of the Gothic atmosphere and suspense weaved in with their romance, as well as some excellent sensual and passionate scenes.