Review: What I Did For A Duke (Pennyroyal Green, #5) by Julie Anne Long 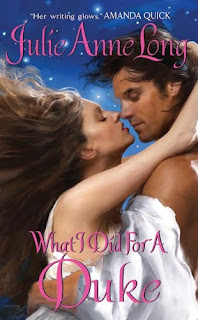 For years, he's been an object of fear, fascination . . . and fantasy. But of all the wicked rumors that shadow the formidable Alexander Moncrieffe, Duke of Falconbridge, the ton knows one thing for certain: only fools dare cross him. And when Ian Eversea does just that, Moncrieffe knows the perfect revenge: he'll seduce Ian's innocent sister, Genevieve—the only Eversea as yet untouched by scandal. First he'll capture her heart . . . and then he'll break it.

But everything about Genevieve is unexpected: the passion simmering beneath her cool control, the sharp wit tempered by gentleness . . . And though Genevieve has heard the whispers about the duke's dark past, and knows she trifles with him at her peril, one incendiary kiss tempts her deeper into a world of extraordinary sensuality. Until Genevieve is faced with a fateful choice . . . is there anything she won't do for a duke?

What I Did For A Duke by Julie Anne Long is a May/December romance with one of those memorable, hilarious first chapters that hooked me. What I found after that is a historical romance with some fabulous wit and snappy dialogue between the two main characters that kept me reading. That hilarious first chapter sets the stage for subsequent scenes that continue in this same amusing vein, although not as extreme or memorable, but then there's more.

What happens in that first chapter? Well, Ian Eversea messes with the wrong Duke by seducing his fiancee, and gets caught with his hands in the wrong cookie jar. What a scene! Moncrieffe doesn't kill him but decides to make Ian sweat by obtaining an invitation to a house party taking place at the Eversea's country home. His plan is to seduce Ian's younger sister Genevieve to get even. Surprisingly, Genevieve turns out to be a smart cookie and figures him out, but there are other reasons for Moncrieffe and Genevieve to team up, and for seduction to take place... plus Ian still needs to suffer.

Moncrieffe is old, and by that I mean he's almost forty! He has the "been there, done that" type of attitude and frankly, he has done it all. He's a Duke, rich, doesn't owe anyone anything, has loved and lost and knows tricks the younger men and women around him can't even fathom. He has a reputation for being intimidating, arrogant and calculating and he loves it. Moncrieffe is actually a mature man who knows himself and his own nature quite well, both flaws and vulnerabilities. He is ohhhh so seductive and passionate, and sneaky and lovable. I fell in love with the man. Once he sees Genevieve for who she really is, his yearning and passion for her are sigh worthy. Best of all the two of them sizzle when together.

Genevieve is a young woman, but she gives Moncrieffe a run for his money when it comes to being brilliantly cunning. I love that she figures him out and calls him out on all of his crap. Genevieve doesn't let him get away with anything, even when she's kind and naive to a certain extent. She's slowly seduced by Moncrieffe and doesn't even realize it, while still pining for her one and only love Harry. Genevieve's one flaw is the longevity of her self-imposed blindness when it comes to her feelings for Harry and his feelings for her.

What I Did For A Duke is a passionate May/December historical romance where Julie Anne Long effectively combines angst, yearning and humor. I laughed out loud more than once throughout the story while loving the seductive dance, the passion and romance. And even at the end when the romance is at its peak, the fun didn't stop. (Bastard!)