Review: Deceived by the Others (H&W Investigations #3) by Jess Haines 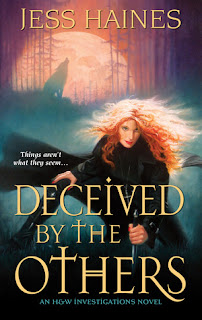 Deceived by the Others is the third book in Jess Haines' H&W Investigations urban fantasy series. In this installment, Shia is taking a little vacation to recuperate from recent injuries and events. She decides to take the time to strengthen the bond with her on again, off again, werewolf boyfriend Chaz by joining him at a resort in the Catskills and getting to know his pack the Sunstrikers during the full moon where they'll be shifting and hunting through their change. She goes as far as bringing a binding contract along with the hopes of proving her love for Chaz. However, once they arrive things don't work out as smoothly as they planned. Some pack members are not happy that Shia is there, and after their cabin is ransacked and Chaz is attacked, Shia puts her P.I. hat on and goes on to investigate. What she finds is a shocker, and after that everything spirals out of control.

This is the first book I've read related to this series, so as you can imagine, the characters and the story were all a new discovery for me. Events and relationships are explained and the story is easy to follow, however, I do recommend that this series be read in order.

As a character I really like Shia. She is a "normal" in the midst of "Others" -- Weres, vampires, mages, witches. Her job is to eliminate the monsters, and in the past she has been quite vocal in her anti-Other sentiments, except that she's found out they're not all evil. The tough part for her in this installment is coming to terms with who is who. Shia puts on a great show as a no nonsense kind of gal but is not overconfident of her personal abilities, and I also like that she is not the typical sarcastic or cynical narrator. Instead, I find her to be quite amusing and love those moments when she just doesn't know what to do. Shia isn't the typical "kick ass" heroine in this installment, except that somehow she always figures out how to take care of herself and doesn't take crap from anybody even when scared.

Chaz on the other hand didn't turn out to be a favorite character from the beginning, which is unfortunate because both he and Shia are the focus of this story. The two biggest problems for me where he's concerned were that I had trouble seeing Chaz both as Shia's boyfriend and as the Sunstriker's alpha. On the other hand, there's a character that is mentioned throughout the book and that makes an appearance at the end, the vampire Alec Royce, who just steals every single little scene where he appears in the book. I want to know more about him! Hopefully there will be more from this character in the next installment.

Although Deceived by the Others is a quick read, the pacing of the story itself is not a quick one. There is a lot of build-up as events unfold between Chaz, Shia, and the pack with small incidents here and there, but the real action doesn't really kick in until after the first half of the book. This worked out for me personally, as it afforded me the opportunity to learn a bit about the characters and the background story. However once the action finally picked up, so did my interest and I rushed to the end to find out the outcome. This in itself was a letdown, as there were really no answers to the two big issues that were raised throughout this installment, although there is a big reveal about Chaz, and something that happens to Shia in this book that I won't spoil for fans of the series.

Deceived by the Others was interesting enough for me that I'll go back and read those first two installments to catch up with this series, and I'll definitely read the next one to find out what happens next. For established fans of the series I would say that although this installment is not packed with action, there are enough new revelations in this book to maintain excitement, plus those issues mentioned above that are left unanswered? One of them is huge for Shia! The next book is a must read.