I won an ARC of Angel's Blood by Nalini Singh at her website before the book first released in 2009. At that time, although I didn't have my blog, I wrote a reader's review and posted it on a message board.

I loved this first book and I can't believe I'm behind on this series, especially since I also read and loved the follow-up short story Angel's Pawn.  I decided to read this review to refresh my memory about the series and the book and decided to post an edited (shorter *snort*) version of my original review. I will definitely be catching up with this series! 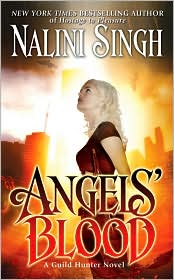 Nalini Singh, known for the tight world building in her paranormal romance Psy/Changeling Series, doesn't disappoint with Angel's Blood. In this, the beginning of her new UF/Romance series, expect to find the starting blocks to a new intriguing world full of possibilities. And what a start it is! Singh has already proven that world building is one of her many talents, and Angel's Blood is obviously just the beginning of another great series.

Singh uses an alternate earth where archangels, angels, vampires, vampire hunters and humans live in relative harmony and out in the open. Here's how they all interact with each other. Called the Cadre of 10, there are only ten archangels in existence, but they are powerful and rule the world by territory. Archangels and angels are the only ones who can make vampires. Vampires are then bound to the angel who “makes” them for a period of 100 years through a "contract." Vampire hunters work for the Guild of Hunters and their job is to hunt down those vampires who break contracts (or run away) with the angels before the 100 year deadline expires. Humans mix with vampires socially, marry them, and feed them if they so desire (or in some cases even if they don’t).

Raphael, the Archangel of New York, is our hero and he is ruthless, cold and feared. He is old, although not the oldest of his kind. He is also a beautiful, arrogant, sexy hawt and complex character; one that I loved from the first. Through Raphael, Ms. Singh gives the reader an understanding of what the immortals are, or could be. Although there are still mysteries about him at the end of the story and getting to know him is a slow process, Raphael's character is well developed.

Elena, our heroine, is a born vampire hunter – not trained -- and is considered the best at her job within the Guild of Hunters. She can smell, sense, track, and capture vampires, plus as a warrior is stronger than a regular human. Her past is both sad and terrifying and that gives her a vulnerability that makes her a more sympathetic character. There are some aspects to Elena’s character that I still don’t understand and hope to see explored in the future. It took me a while to appreciate Elena's character, however once I did, I fully embraced her as the heroine.

Raphael engages Elena for a dangerous mission. He wants her to hunt, not a vampire, but another Archangel. This is a suicide mission, since Archangels are immortal and this particular one is more dangerous than most. Both Elena and Raphael prove themselves to be worthy of being our protagonists when confronted with this challenge. Raphael’s commitment to what must be done is admirable, even when confronted with tough decisions, and Elena definitely lives up to her reputation of being the “best.” There are no moments where you wonder why she was chosen for the mission. She delivers the goods, and does it by whatever means necessary. This part of the story line develops slowly and, at times, too slowly for me. I found myself eager to get to the action. The last third of the book finally gave me what I was waiting for.

Ms. Singh labeled this series an Urban Fantasy/Romance. The first thing that I noticed about this book was that it is not written in the first person from the female’s point of view, as most UF books are presented. Refreshing, I’m sure, for most UF readers. Singh, however, keeps some of the elements that make UF the genre that attracts so many readers: the strong heroine, the urban setting, a conflict that will not be easily solved and therefore will need further installments in the series for it to be properly addressed.

She managed to do all of the above, while writing a romance worth reading as well. Yes, there IS romance in this book, one with a satisfying conclusion. The interactions between the Archangel Raphael and Elena are fraught with tension and heat from beginning to end. Raphael is powerful, ruthless, frightening and one sexy archangel. Elena's personality is complex and full of contradictions. She is strong talented and hardheaded, yet she's also vulnerable, frightened and sexy. Elena also tends to alienate almost everyone she encounters on her way. Together, Raphael and Elena make for an explosive combination.

Ms. Singh has done an excellent job of combining the best of both worlds, UF and Romance, with this installment. I am more than looking forward to the next installment.

Original review posted on The Phade February 2, 2009
Posted by Hilcia at 7:05 PM