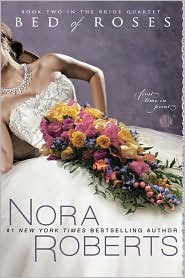 As little girls MacKensie, Emma, Laurel, and Parker spent hours acting out their perfect make believe "I do" moments. Years later their fantasies become reality when they start their own wedding planning company to make every woman's dream day come true.
In Bed of Roses, florist Emma Grant is finding career success with her friends at Vows wedding planning company, and her love life appears to be thriving. Though men swarm around her, she still hasn't found Mr. Right. And the last place she's looking is right under her nose.
But that's just where Jack Cooke is. He's so close to the women of Vows that he's practically family, but the architect has begun to admit to himself that his feelings for Emma have developed into much more than friendship. When Emma returns his passion—kiss for blistering kiss—they must trust in their history…and in their hearts.

It has taken me a while to process my thoughts, because frankly I don't know what happened to me while I was reading Bed of Roses. The bottom line is that this story did not work for me. For some reason, I didn't really find it romantic, erotic or amusing and I was even disappointed in some of the friendship interactions in the book. Most of the story felt flat, as if something was missing and I could not put my finger on it. I'm not sure if it was me or the book, but let's try and figure it out. Note: I tried my best NOT to include spoilers.
Emma is the florist in the quartet of friends that runs Vows, a bridal planning company. She's also beautiful and a romantic. She has a healthy family background and is looking for that one man, the one she will one day dance with in her fantasy moonlit garden. Jack is an architect with a thriving business and has been Del's best friend since college. Del is Parker's brother and this makes Jack one of their inner circle, part of their family. He comes from a broken home and these friendships mean much to him. Just as Emma is known for attracting men, Jack is known for attracting women and he, like Emma, does not commit to long term relationships. Jack and Emma, however, find that they are powerfully attracted to each other and decide to become lovers with the condition that they'll stay friends after the affair is done.
Let me begin by saying that I think it's a great premise, and the book is full of wonderful characters. I love the "friends to lovers" trope, it has to be one of my favorite plot devices in a romance. However, for some reason it didn't work for me in this book. I liked Jack and Emma separately. They were likable characters who I thought deserved a happy ending -- together, they just didn't do it for me. I didn't buy that Jack was passionately in love with Emma, and that might be because when his admission of love came (I wouldn't call it a realization), it was less than convincing. It felt forced, like he was pressured in more ways than one into making that admission -- it didn't feel as if it came from his heart and soul. I also felt that Emma allowed others to dictate her moves instead of following her heart.
The friendship between the four friends in this book took a turn I definitely did not enjoy, and frankly I think it somewhat spoiled the book for me. In Beds of Roses, the friends' contributions (one in particular) felt more intrusive than supportive. They crossed that fine line that I don't think should be crossed no matter how close you are in a friendship. The fact that Emma allowed them to interfere and went along with her friends -- when aware of their interference -- also bothered me.
Unlike Vision in White, Bed of Roses had less amusing dialogue to offer, with the exception of one or two wedding mishaps to do with Vows. And speaking of Vows, I would like to address the massive amount of flower detail in this book. Yes, Emma is the florist, however, after the first few times her flower arrangements, bouquets and centerpieces were described my eyes began to glaze over. I found myself wanting to skim through those details after a while, and I don't skim Nora Roberts' books. More than once, I found myself wishing for more Emma / Jack time and less Emma / flower time.
Finally the end. I felt the end of the book was rushed and abrupt to say the least and Emma and Jack's last few minutes with each other could have been used a few more pages or even paragraphs. The two of them alone with more to say to each other would have gone a long way, and maybe it wouldn't have left me with that flat, disconnected feeling.
My feelings while reading this book were not all negative. For the most part, I did enjoy the friends' interactions with each other when not connected to Jack and Emma's romance. I really enjoyed Del and Jack's relationship and the "buddy," male bonding that seems to be developing between the males in the series. I still loved the atmosphere and the set up that Nora Roberts introduced in Vision in White and further developed here, and I liked some of the new characters introduced in this installment.
Bed of Roses is not my favorite book in this series so far, but it is only the second one. I particularly liked what I saw of Laurel whose story is next in the series. She seemed a different person from the one I envisioned in Vision in White. I think the next book should be a more interesting "friends to lovers" story and I'm looking forward to reading Savor the Moment.

You can read an excerpt for Bed of Roses here.
Posted by Hilcia at 11:02 AM