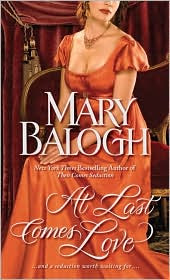 Only desperation could bring Duncan Pennethorne, the infamous Earl of Sheringford, back home after the spectacular scandal that had shocked even the jaded ton. Forced to wed in fifteen days or be cut off without a penny, Duncan chooses the one woman in London in frantic need of a husband. A lie to an old flame forces Margaret Huxtable to accept the irresistible stranger’s offer. But once she discovers who he really is, it’s too late—she’s already betrothed to the wickedly sensual rakehell. Quickly she issues an ultimatum: If Duncan wants her, he must woo her. And as passion slowly ignites, two people marrying for all the wrong reasons are discovering the joys of seduction—and awaiting the exquisite pleasure of what comes after….

I've been following Mary Balogh's latest historical romance series featuring the Huxtables. Her latest entry, At Last Comes Love was released on April 28th and I picked it up on release day. Balogh happens to be a personal favorite -- not so this series. I'm following it and will finish it. It is Balogh after all. But are these books keepers, books that I'll re-read? Not for me, not this time. Why? So far, although I didn't love the first book in the series, First Comes Marriage, I did enjoy it. Not so with the second installment, Then Comes Seduction, where I had some problems connecting with the heroine as well as with the premise.

Throughout At Last Comes Love, I thought this was the best of the three releases in the series. Margaret is my favorite Huxtable sister and from the beginning I thought deserved happiness and true love. Her experiences with Crispin Dew, the man who broke her heart, were severe enough to make Margaret an intriguing heroine--a woman who sacrificed her love for her family and lost--and for the most part, her character lived up to my expectations. She is portrayed as an honest, direct type of woman who doesn't let life beat her. After her initial moment of cowardice, which was motivated by pride, Margaret comes through.

Duncan Pennethorne is not your usual Balogh hero. He is not the man of impeccable honor or even the charming rake that frequent her books. He is a truly ruined man, one who has committed not one, but two unforgivable immoral acts unpardonable in society's eyes. He is an unhappy man who has made tough choices. Those choices have affected him and all those around him and will continue to do so in the future.

Duncan was a perfect match for Margaret. They both worked hard at solving their differences and at learning to trust and love again under very difficult circumstances. Margaret's family, while attempting to be supportive and under the guise of taking care of her and her best interests, came off as patronizing and at times hypocritical and judgmental, in my opinion -- especially after some of their own recent experiences. After trusting Margaret to make decisions for them throughout their lives, they didn't trust her to make decisions for herself. Good thing Margaret had a mind of her own.

Balogh's books are mostly character driven, and she usually manages to weave the plot and the characterization almost seamlessly, it's what I love about them. In At Last Comes Love, I didn't find this to be the case; it almost felt as if I were reading two different stories.

In one, the hero and heroine were in the get to know each other, know thyself phase and Balogh did a gorgeous job of it as always. I loved both characters -- their attempts at honest self-analysis and their slow, meandering journey towards love, Balogh style. Plus, (for me this is a plus) as in many of her books, she explores what seem to be her favorite subjects: what makes a man of honor, a woman of character, and in the end is love fated or is it all a matter of chance?

In the other, there was this whole plot with a secret/mystery and a villain that felt forced and that progressed dramatically towards the end of the book. By the time the climactic scene came along, I couldn't believe that was the end of it -- I kept expecting one more secret to pop out of the bushes. The worst part for me was that at the end everyone went into happy-joy mode and I didn't believe that all those involved could be so accepting of the circumstances, nor did I buy the resolution in this case.

The last quarter of the book featuring a not-so-likable child, a contrived and forced conflict and some very one dimensional villains, made this book a frustrating reading experience for me. After having enjoyed most of the book, I was left less than satisfied at the end.

The next installment in this series, Seducing an Angel, Steven Huxtable's story, releases May 19th. I am looking forward to reading all about cousin Constantine Huxtable; his is the story that intrigues me the most in this series.