Review: Mystery of the Tempest: A Fisher Key Adventure by Sam Cameron 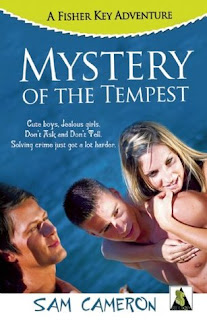 Twin brothers Denny and Steven Anderson love helping people and fighting crime alongside their sheriff dad on sun-drenched Fisher Key, Florida. Steven likes chasing girls. Denny longs to lose his virginity, but doesn’t dare tell anyone he’s gay. Steven has a secret of his own. He lied to everyone, including his own brother, about being accepted into SEAL training for the U.S. Navy.

On the day they graduate high school, the twins meet the handsome new guy in town, a military veteran with a chiseled body and mysterious past. Meanwhile Brian Vandermark, a gay transfer student from Boston, finds himself falling for closeted Denny but hampered by his shyness. When an antique yacht explodes in Fisher Key harbor, all three boys are caught up in a summer of betrayal, romance, and danger. It’s the Mystery of the Tempest¬—and it just might kill them all.

Set in the Florida Keys, Mystery of the Tempest by Sam Cameron is a fast paced LGBT young adult mystery that turned out to be engrossing and entertaining enough that I read it through in one sitting. The main characters, Anderson twins Denny and Steven, are the main focus of the story as they solve a mystery that revolves around the explosion of the antique yacht The Tempest and reveal important personal secrets in this fast moving story.

Denny and Steven are known throughout the island for helping their father, the island's sheriff, solve crimes. So it doesn't come as a surprise to anyone when the twins are smack in the middle of the events that lead up to explosion of The Tempest, or when they follow up afterwards by attempting to figure out what really happened. Soon things become complicated when the boys realize that they are being followed, "accidents"pile up around them, and as everything unravels, lies by friends and family betrayals come to light.

Events taking place in the boys' personal lives further complicate matters. The boys are identical twins but there are differences between them. Stephen is the athlete who dreams of becoming a Navy Seal and Denny is the straight A student with dreams of becoming part of the Coast Guard. But the biggest difference between the two is that Stephen likes girls and Denny likes boys. Stephen's girlfriend Kelsey is ready to go forward with their relationship and agrees to sex after their high school graduation, but Denny is deep in the closet which makes him a frustrated virgin with no hopes of a change in status in the near future.

Everything changes on the night of their high school graduation. Not only does The Tempest blow up, but Denny and Stephen meet a couple of people that will have substantial influence in their lives. There's the gorgeous ex-Navy Seal hanging around Fisher Key that sets Denny to drooling and daydreaming, and then there's the mutual attraction between Denny and Brian Vandermark, the shy young man recently transferred to school from Boston. Of course all the secrets the boys are keeping from family, friends and each other further complicate matters.

Stephen lied to Denny and everyone about his future plans and doesn't know how to reveal the truth. Denny was accepted by the Coast Guard but is keeping the fact that he's gay a secret from everyone except Stephen. As the summer progresses and events become more complex around the boys, their secrets and lies become heavy burdens to carry. This is frustrating for Denny as he and Brian become more attracted to each other every day, and for Stephen who can't share his worries about future plans and whose girlfriend is not what he expected.

Using the third point of view every other chapter is narrated from Stephen, Denny, and Brian's perspectives, making this a well rounded story where all central characters' views are well represented. I particularly enjoyed the young adults' voices and the fact that they're portrayed as young adults, not grown-ups. The dialogue is contemporary but not overdone and the characters' concerns are quite appropriate to circumstances, age and time.

The mystery in this story is enjoyable although I did figure it out before the end. However, the most enjoyable aspects of the story for me were the personal issues to the boys' stories, as well as their revelations. How Denny comes to terms with his sexuality and deals with his frustrations are well addressed issues by the author, as is Stephen's personal situation. I liked that lying about his future and the newness of a sexual relationship with his girlfriend deeply affected this character. And speaking of time-appropriate portrayals, I specifically enjoyed Kelsey's character. Here's a young girl who sets a high bar for sexual interaction based on what she's read and posts all her likes and dislikes on Facebook. If I have one niggle about this story is that when reading this book there's a sense that there have been previous stories about the Anderson twins, however I could not find any other books in this series.

This is a different type of read for me, a young adult gay contemporary mystery. Sam Cameron is an author whose short story, "Day Student," I enjoyed in a recently reviewed anthology. In Mystery of  The Tempest: A Fisher Key Adventure, I again enjoyed the way this author captures young adults' voices, particularly the brotherly relationship between Steven and Denny, as well as youth's insecurities and strengths presented through the portrayal of Brian's character and his relationship with Denny. I do love mysteries and this one turned out to be an enjoyable, fresh read for me. Recommended.