SF Mini: The Long Way to a Small, Angry Planet by Becky Chambers 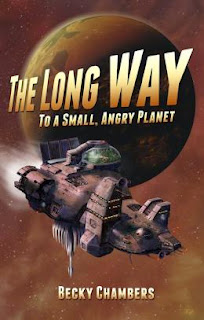 Written in an episodic style, Becky Chambers' debut novel The Long Way to a Small, Angry Planet is an intergalactic journey driven by the characters. The author focuses on the close-knit crew, the changing relationships between them, and the intimacy of the world they inhabit within their ship, the Wayfarer. Additionally, Chambers highlights how the crew as a whole and each individual crew member is affected by events occurring and reshaping the vibrant, vastly diverse galaxy outside of the small bubble they have created for themselves inside the ship.

The Wayfarer builds man-made wormholes that allow for faster intergalactic travel. It is an ugly old ship pieced together by its techs and fueled by algae grown on the ship. Chambers includes technical details about the ship's function, the ship's AI, and specifically how it goes about creating those wormholes, but it is the Wayfarer's diverse crew and their life experiences that hold the reader's attention.

Led by a pacifist captain, the crew is composed of aliens from different worlds, a sentient AI, and humans from diverse backgrounds -- humans who grew up in an environmentally depleted Earth, others descendants from humans who escaped to Mars, and still others who grew up in space ships. Aliens are the majority and hold the power in the galaxy, and humans, a minority in this world, survived extinction through self-destruction only by shear dumb luck. Chambers builds a whole galaxy through her characters, their different worlds and cultures of origin.

The Long Way to a Small, Angry Planet is all about the crew's long journey to a final destination. Once there, everything ends quickly. Although not necessarily a negative factor for this style of science fiction tale, perhaps the plotting could have used a bit more outside conflict, particularly since it is such a long journey to that "small, angry planet." Having said that, the world-building, characters, and relationships make this story shine. The episodic style works in this novel, with each episode/chapter having a beginning and an end, but fitting well with the ongoing story. I thoroughly enjoyed traveling through space with this crew, loving every new discovery about their world along the way.

----------
ABOUT THE AUTHOR: Becky Chambers is a writer and editor. Her work has appeared at The Mary Sue, Tor.com, and elsewhere around the internet. The Long Way to a Small, Angry Planet is her first novel. Born and bred in California, Becky lives with her partner in Reykjavik, Iceland.