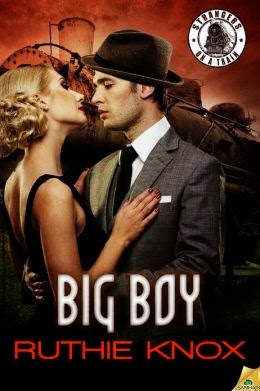 
He’ll be any man she wants—except himself.

A Strangers on a Train Story

Meet me at the train museum after dark. Dress for 1957.

When Mandy joins an online dating service, she keeps her expectations low. All she wants is a distraction from the drudgery of single parenthood and full-time work. But the invitation she receives from a handsome man who won’t share his real name promises an adventure—and a chance to pretend she’s someone else for a few hours.

Yet when she tries to draw her lover out of the shadows, Mandy has a fight on her hands…to convince him there’s a place for their fantasy love in the light of day.

Warning: Contains sexy role-playing, theatrical application of coal dust, and a hero who can rock a pair of brown polyester pants.

I'm probably the last person to read Big Boy! I purchased it as soon as it released after having read two books by Ruthie Knox that I just loved. Unfortunately, I never seemed to be in the right mood to read it and let it just lie there on my Kindle.

Mandy is a very young, busy, stressed out single mom. She became mother to her baby nephew Josh after her sister, brother-in-law, and three year old niece died in a tragic accident. Of course it changed her life irrevocably at a time when she was not quite ready for it. To ease stress and give herself time to breathe, once a month Mandy goes out on role-playing dates with a man she met online. Rules are set from the beginning, they each dress-up in period costumes, keep up with their individual role during the dates, and do not exchange names or personal information.

Although technically Mandy and her hot, role-playing partner had only met a total of nine times in nine months when this story began, Knox worked to build this relationship for over a year. That slowly becomes obvious as the story progresses. It shows in how both characters, but particularly Mandy, have changed and influenced each other over that period of time through conversations, the role playing characters, and the anticipation of seeing each other again.

The role playing itself is a fantastic part of this novella for different reasons. I love the descriptions of the costumes they wore and how well Mandy and her partner-in-sexy times get into their roles. And that brings us to Knox's sex scenes which are steamy hot as well as sensual. No need for dom/sub titillation in this novella either. Take a look at the "warning" at the bottom of the summary, those brown polyester pants were hot. What a scene!

Part of the excitement comes from the fact that these two people are strangers, and pretend that they are someone else. Let themselves go. Give themselves a break. But, this is a contemporary and as such, I always look at behavior through a contemporary lens. So, of course there is one huge niggle that made the hairs at the back of my neck stand straight up. It has to do with Mandy going on a first date with someone she met through the internet and met, alone, at a secluded place that first time! I don't care if she had mace as precaution, this is not safe behavior. If you have a daughter who dates, I don't care the age, this will bother you too. I had to suspend disbelief in order to continue with the story because who does that these days? It bothered me.

Once I placed that aside, however, I loved Big Boy, the trains and historical bits about them. Knox executed the romance and eroticism in this novella beautifully and I found that the conflict between the protagonists was valid and well thought out. I like both characters and believe they had good reasons for seeing each other and for keeping the relationship "as is" as long as they did. The epilogue showed a good happy ending that I found satisfying. A great, quick read. Grade: B+