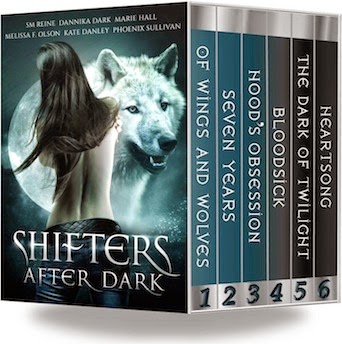 What else have I read in January beside fiction? I purchased the 'Shifters After Dark Box Set' (October 22, 2014, Steel Magnolia Press) a PNR/UF bundle that contains five books and one novella. A couple of reasons behind that decision:
(1) the price is right ($0.99);
(2) It is great to have a few UF books with wolves and vampires handy for when the "mood" strikes;
(3) I may find a new UF series to follow.

From this bundle, I read two novels and an 'origins' novella. All books are part of already existing series.

Of Wings and Wolves (The Cain Chronicles #6) by SM Reine

I had a hard time with this story since it is apparently the sixth book of a series. Of course I did not know this fact until after I read it. The main characters, twins Summer and Abram, are whisked away by their grandmother to another dimension, and while the babies' parents are supposed to follow, they never make it. Once they grow up, Summer meets Nash Adamson, a powerful, angsty angel she suspects he wants something from her but can't help but find him very attractive. This attraction is mutual, of course. Later, another dangerous angel, along with her minions, makes an appearance and it is revealed that the twins' whole lives are based on a lie. Shifters, angels, secrets, lies, and alternate dimensions are the main components that make the world turn in this novel. Unfortunately for me, I did not really gain real understanding of how everything began or where the overall story arc was going by reading Of Wings and Wolves. I found it to be a confusing, unfinished read.

I liked the premise for Seven Years. Wolf shifters and mages are the main players in this first UF installment. Dannika Dark begins by introducing a still grieving Lexi Knight on the seventh anniversary of her brother's death, as well as her brother's best friend Austin Cole who has just returned home after having been gone those seven years. He is a young wolf alpha only just assembling his pack, and his return home is filled with guilt caused by his discovery that Lexi and her family have been abandoned and left without protection by her father after Lexi's brother's death. She and her family are in danger and Austin arrives on the scene just in time to become their protector.

Austin comes off as too overprotective, but he is a nice guy who gives Lexi choices we don't usually find in other stories with alpha shifters as protagonists. Lexi and her family have been targeted from a few different fronts. She is independent and used to taking care of her mother and little sister, but Lexi, who is new the world of shifters and magic, doesn't ask the right questions and suffers from lack of judgment. On the other hand, Austin doesn't explain situations clearly and makes some pretty basic mistakes himself. Some of it has to do with their mutual attraction, but much of it seems to be lack of experience or stubbornness from both sides.

I like many of the secondary characters in this UF series and the whole mage with shifters magic that develops. Some sections of the storyline did not quite make sense, i.e., Lexi inheriting a business when she is admittedly not the most knowledgeable or close to the person who left it to her. But it could be that this thread is further developed later on. So, overall a good first installment filled with a sense of menace, action, and interesting secondary characters. Even with some of the issues mentioned above, Seven Years is a good enough read that I will follow up by picking up the second book of the series.

Bloodsick is an origins novella focused on Will Carling, the werewolf alpha from Melissa F. Olson's Scarlett Bernard UF trilogy. It chronicles how he became a werewolf after he unknowingly falls in love with the young and powerful witch Sashi, and in doing so makes some powerful enemies. However, we do not actually get Will's point of view, as the story is narrated by young Sashi and Astrid, an abused female werewolf belonging to the local pack.

There are two parallel stories going on at the same time. In the first, Sashi is being pressured by her famous mother, Dr. Noring, to follow in her footsteps. To use her powers to heal through touch by listening to the bodies of humans who are terminally ill. But Sashi's powers are different from her mother's, she is not only more powerful but she is also emphatic and cannot deal with the emotional pain involved with healing. She fights her mother but goes along until she meets one of her mother's patients, a young Will Carling and they begin dating against her mother's wishes. The second story involves Astrid, a female wolf who was brought into the local pack with the sole purpose of being mated to the alpha. Except that Astrid's wolf is incompatible with his and will not submit. This results in increasingly violent, physical and non-consensual sexual encounters between the two that end with Astrid needing Dr. Noring's healing powers on a regular basis. These two threads become entangled after Sashi witnesses healing sessions and unwittingly involves Will in her attempt to save Astrid.

In my mind the title of this novella should be "betrayal" because no matter where you look betrayal at the core of the overall story. There are multiple victims, victims who pay the price for the other characters' mistakes, suffering, and/or hubris. This novella, although violent and for the most part downright depressing, kept my interest through Will's character.

Reading Bloodsick led me to give the original Scarlett Bernard UF trilogy a try, so I borrowed the first book, Dead Spots, from Amazon. Unfortunately, although there are some unique additions to the world-building such as the fact that the heroine is a null or someone who nullifies the magic powers of those around her (vampires, witches, and werewolves) and physically vulnerable instead of kick-ass, everything else is pretty much old news in this UF world. The heroine works exclusively for the two powerful vampire and werewolf alpha leaders as well as the head of the witches, and is at their beck and call day and night. The story is narrated from two points of view: that of the heroine and a human cop. They partner up to solve a gruesome multiple-murder and beat a deadline set the vampire alpha at the end of which, if they fail, he kills them both. There is a requisite love triangle developing between the heroine who doesn't believe in love or commitment, the werewolf Beta with whom she has had a few drunken-fueled sexual encounters (he is emotionally involved, she only wants sex), and the human cop with whom she shares a mutual attraction and could potentially give her a 'normal' life.

The crime investigation, world and character building take up most of the page time, with the potential for romance taking a back seat. The crime investigation means there is action and a mystery to solve. Olson gives enough background story about Scarlett and her family so that we know why she has become emotionally stunted, and we get a good look at the vampire alpha and Scarlett's love interests. In this first book, however, Scarlett comes off as not much more than her employers' gofer and scared witless of the vampire alpha. I looked for Will Carling, the werewolf alpha from Bloodsick, and although he is involved in the storyline his appearances are as underwhelming as the overall story in Dead Spots.
-----------

I had some issues with this bundle.
(1) Including a book from an already established series that does not stand well on its own and feels like an unfinished product (Of Wings and Wolves, Cain Chronicles #6) is frustrating and does not give me the incentive to look for previous books.
(2) The novella (Bloodsick) has interesting enough characters that I went looking for more information about them and followed through by reading the first book of the series. Unfortunately, the one character is minor and underwhelming while the others are missing. Additionally, the plot and characters in the first book of the series turn out to be predictable and disappointing.
(3) Although I did not mention it in my minis, the editing throughout all three books need extensive work.

In the end, Seven Years (Seven #1) by Dannika Dark is the best read of this bunch. I may read the other three books included in this bundle when my "mood" for vampires and werewolves strikes again.
Posted by Hilcia at 4:02 PM