Review: In Your Dreams (Blue Heron #4) by Kristan Higgins 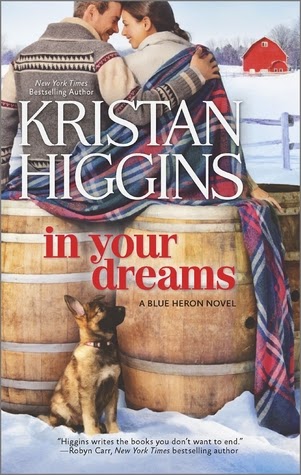 Emmaline Neal needs a date. Just a date—someone to help her get through her ex-fiancé's wedding without losing her mind. But pickings are slim in Manningsport, New York, population 715. In fact, there's really only one option: local heartthrob Jack Holland. Everyone loves Jack, and he won't get the wrong idea…. After all, Jack Holland would never actually be interested in a woman like Em. Especially not with his beautiful ex-wife creeping around, angling to reunite ever since he rescued a group of teens and became a local hero.

But when the wedding festivities take an unexpectedly passionate turn, Em figures it was just one crazy night. Jack is too gorgeous, too popular, to ever end up with her. So why is she the one he can talk to about his deep, dark feelings? If Em is going to get her dream man, she'll have to start by believing in him…

Emmaline, Manningsport's only female cop, needs a date to her ex-fiancé's wedding because she is still hurt by the way he dumped her. Jack Holland needs to get out of town and agrees to go to the wedding with Em because after having saved three out of four teenagers from an accident he is traumatized. Additionally as a result of all the publicity, his ex-wife is back in town hoping for a reconciliation.

I liked the couple in this romance. Em is a cop and a bit of a tomboy and Jack is a gorgeous man, but not superficial or vain about his looks, on the contrary, he's unaffected and sweet. Both characters were hurt in past relationships by selfish people and still bare deep scars. They work through those past conflicts as their own romance evolves.

A developing relationship between Jack and Em is interrupted by two over-long sections, the first covers Em's relationship with her parents and ex-boyfriend, and the second gives details about Jack's engagement, marriage and divorce from his ex-wife. Sandwiched between those two is the wedding section where Jack and Em get to know each other and a real attraction is born. Additionally, Higgins works her magic with funny, outrageous scenes, some riddled with lies, great dialog, and some hot sex thrown in for good measure. It is unfortunate that those overlong sections detailing background stories take away some of the momentum driving the romance forward in the wedding scenes, and that those three distinct sections give this romance a bit of a disjointed feel.

As always when reading a Higgins romance secondary characters impact the story, some of them popular characters already featured in this series. This time, however, a few of the new characters introduced are memorable for their actions: Em's ex-boyfriend for his struggle with obesity and overcompensation as a result of losing the weight, Em's parents' inadequacies and struggles to understand her, and her sister's sweetness and understanding.

Although the romance is interrupted, overall In Your Dreams is a very good romance read with a likable couple, some interesting secondary characters, and a few of those thoroughly embarrassing and/or funny moments we expect from Higgins. I particularly like Em and Jack. Em as an independent woman who doesn't need rescuing, and Jack as a caring, sweet man who takes his time, but in the end is just looking for true happiness.

---------------
ABOUT THE AUTHOR: Kristan Higgins is the New York Times and USA TODAY bestselling author of more than a dozen novels and a two-time winner of the Romance Writers of America RITA Award. Her books have been translated into 21 languages and received numerous starred reviews from Publishers Weekly, Booklist, Library Journal, Kirkus and Romantic Times. Her books have been listed as Best Books of the Year by Publishers Weekly, Kirkus, National Public Radio, Library Journal and Amazon.

Kristan lives with her heroic and tolerant firefighter husband and two snarky and entertaining teenagers in her hometown in Connecticut. For more information about her books visit Kristan Higgins here.