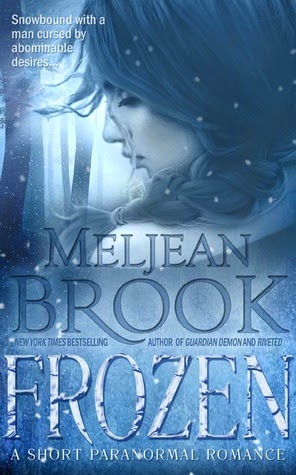 I've felt the onslaught of arousal, the sudden tightening of my body, that delicious shudder when a man's tongue penetrates my lips and takes possession of my mouth.
I've never been kissed as if he needed it. As if he'd die without it.

Frozen is a stand-alone paranormal romance novella initially developed by Meljean Brook as a free on-line read. [This story includes a premise that some readers might find problematic or triggering]

The setting is contemporary with both male and female protagonists initially meeting through their jobs as civil engineers working on the same project for different construction companies. Deep attraction leads to an all-consuming kiss, but afterwards Erik Gulbrandr walks away with an apology. For a year and a half as they work together, Olivia Martin believes that Erik's cold regard signals disinterest and tries to forget that for a moment she felt that Erik was "the one." But when Olivia is asked to stop at Erik's isolated home to deliver paperwork, they find themselves snowbound during the winter solstice and everything changes. Olivia discovers that Erik is living under a terrible curse that includes her and in the end may destroy them both.

As a paranormal romance Frozen is filled with heavy sexual tension and secret longing. It offers danger and violence to the protagonists from outside sources, triggering those protective responses we have come to expect from alpha males. However, although Erik is icy-cool and sexy, he is not the typical alpha male who allows his "other" side to take control without a fight, and Olivia is depicted as a smart woman. The romance is a different story altogether. For most of the story Olivia is guided by that first moment of rejection just as Erik is tormented by the curse's compulsion and can't see past it to Olivia's real feelings. They don't communicate and as a result misunderstandings cause unnecessary pain for them both.

Brook utilizes a spattering of Norse mythology -- descendants of Odin's sons, Fenrir the Wolf and the Ironwood Witch -- to create a cursed family with the oldest son inheriting the curse and carrying it down the line, skipping some generations, but never going away until Ragnarok. Exposition is over utilized to establish world-building in some sections, i.e., Olivia's over extended thought process after alone-time research and conversations with Erik. However, Olivia's first point of view narrative works well for most of the story particularly at first when back flashes first clue in the reader on the protagonists backstory and later as Brook uses it to show the depth of feelings between the characters, to keep the reader immersed in the action scenes, as well as in all those wonderful lusty scenes that we all expect from a Meljean Brook paranormal romance.

Without giving away too many spoilers, I believe that the focus behind this novella is to establish consent within the perimeters of a paranormal romance by giving the female a choice that is initially taken away from both protagonists through "magical" means. Meljean Brook's paranormal romance novels are well-known for complex world-building and steamy couples. My expectations of Frozen were of a hot, steamy romance and good world-building with a narrower focus due to length -- they were met.