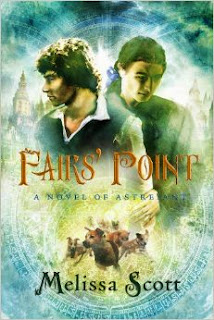 During Dog Moon, the chief entertainment in the great city of Astreiant, for nobles and commons alike, is the basket-terrier races at New Fair. This year, with spectacularly bad timing, the massive and suspicious bankruptcy of a young nobleman has convulsed the city, leading to suicides, widespread loss of employment, and inconvenient new laws around the universal practice of betting on the races. As well, a rash of mysterious burglaries seems to suggest a magistical conspiracy.

Pointsman Nicolas Rathe is naturally in the midst of all these disturbances--as is his lover, foreign former mercenary Philip Eslingen. When Eslingen receives a basket-terrier puppy in the redistribution of the bankrupt's household goods, he makes the best of it by having the pup trained for the races, an action that draws him and Rathe deeper into the coils of a mystery somehow involving New Fair's dog races, bookies and bettors, the bankruptcy and its causes and fallout, burglaries, and a new uncanny form of murder.

Fairs' Point is the continuation to the classic Astreiant fantasy series by Melissa Scott. I adore the world-building, characters, and mysteries in this series!